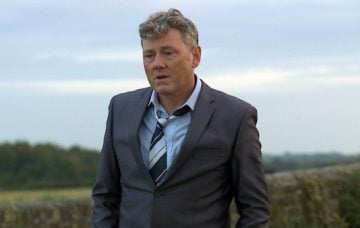 Emmerdale SPOILER: Daz caught as he tries to escape

How long can he keep his secret hidden?

There’s trouble heading for Emmerdale’s Daz Spencer next week when the truth about the hit and run starts to catch up with him… will he manage to flee the village before he gets caught?

Emmerdale fans will already know that disaster strikes in the Dales when Noah and Leanna take a prank too far when they steal Daz’s car and take it for a joy ride – dragging a  horrified Amelia along for the journey.

But when things get heated in the car and the teenagers crash, it looks like all three of them are in serious trouble after they abandon the vehicle in a field.

However the drama doesn’t end there this week when drunk Daz finds his abandoned car on the way home from a night out and decides to drive it home.

Before he can make it back to Emmerdale, disaster strikes when he hits someone on the road, who Daz then leaves for dead.

Next week sees Daz struggling to cope with the guilt of what he did – especially as Kerry Wyatt and Dan Spencer try and reassure Amelia that she won’t get into trouble with the police because she wasn’t directly involved in the drama.

Daz is desperate to escape the country before the police work out what really happened and it doesn’t take long for him to book flights abroad.

But while Daz is trying to make his sneaky escape from the village before anyone sees, his plan is totally thwarted when he sees Kerry collapsed in the road.

Despite knowing that if he stops and helps he will miss his flight, Daz still does the right thing and goes to her aid – leaving his escape plan scuppered.

Daz’s brother Dan then takes over, helping Kerry to the doctors and leaving Daz to try and rearrange his secret escape from the country. But this time it is his own daughter who stops him in his tracks.

After catching Daz trying to leave in secret, Amelia demands to know why he is going without telling anyone. If only she knew!

As Kerry and the rest of the village all rally, trying to work out what happened in the accident, Amelia is reassured that she won’t have the finger of blame pointing at her.

But while she might feel slightly better about things, the same definitely can’t be said for Daz.

He’s terrified that the net is closing in on him, and if he doesn’t escape the country soon, he could be facing jail.

Do you think Daz deserves to go to jail? Leave us a comment on our Facebook page @EntertainmentDailyFix