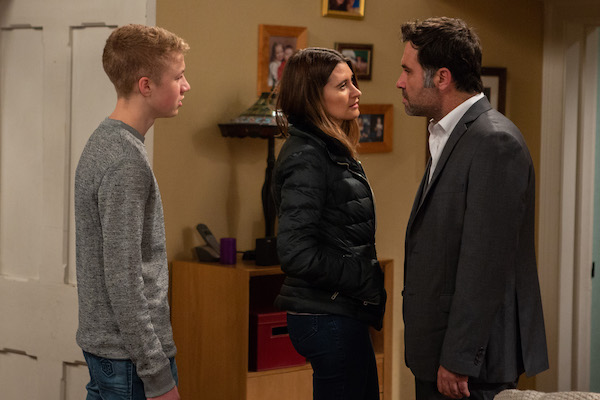 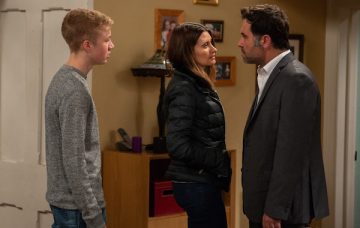 Is Graham about to spill the beans?

With drunk Graham Foster in serious self-destruct mode next week, it looks like it’s only a matter of time before Cain Dingle’s deadly secret is revealed.

Graham has been on a downward spiral ever since Joe Tate’s death – and Emmerdale fans will know that it’s because he’s secretly the one who killed the closest thing he had to a son.

But while Graham struggles with his guilt, Cain is totally in the dark about what really happened to Joe, thinking he’s the one who killed him after punching him for not turning up to his wedding to Debbie.

Read more: Sworn enemies in Emmerdale to embark on a torrid affair?

But while Graham is losing a grip on reality as he downs more and more alcohol, it looks like he might be on the verge of telling Debbie that her dad is the reason she’s not living happily-ever-after as Mrs Tate.

After Graham arrives drunk to a business meeting, scheming Nicola makes the most of his state and plies him with more alcohol, thinking she will be more likely to get her way if he’s not coherent.

But Megan is worried about her former flame and tries to talk some sense into Graham, struggling to persuade him to stop drinking.

But unfortunately for Graham, he’s so drunk that he misinterprets Megan’s kindness and tries to kiss her.

Of course Megan’s been there and got the t-shirt already and, not wanting to make the same mistake twice, she pulls away.

Graham is left mortified by her rejection and dashes off, leaving Megan terrified about what he might do next.

And she’s right to be worried. After Noah starts quizzing him about Joe again, Graham can’t cope with the lies and bundles him into the car.

With drunk Graham veering all over the road, it doesn’t take long for Noah to realise that he’s in danger. But being in the car with an alcoholic soon becomes just half of the drama for Noah as they pull up outside Butlers Farm.

Graham tells Noah that if he wants answers about what happened to Joe, he doesn’t need to look any further than the house in front of him… but does this mean he’s about to reveal what happened with Cain?

As they knock on the door, Debbie answers and is left shocked when Graham implies that her dad knows a lot more about Joe’s disappearance than he’s letting on.

Could this be the moment that Debbie’s world is turned upside down and her relationship with Cain damaged forever?

Do you think Graham will tell Debbie that Joe is dead? Leave us a comment on our Facebook page @EntertainmentDailyFix and let us know what you think!