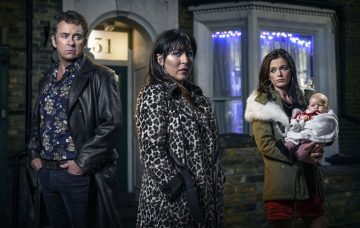 Where did that hair suddenly appear from?

The Christmas Day episode of EastEnders ended with Alfie Moon’s apparently lifeless body lying at the bottom of the stairs.

He’d been pushed by his baby mamma Hayley during a heated exchange between him, her, Kat and Stacey.

Earlier Kat had finally discovered that Cherry was in fact her husband’s daughter, just as she had decided to put her wedding ring back on.

Naturally devastated, Kat told Alfie to sling his hook when the deluded fool suggested that they could still be together and find Hayley somewhere to live nearby so they could share custody of the tot.

When Kat tried to throw him out, Alfie turned uncharacteristically nasty and admitted that he blamed her for the sexual abuse she’d suffered at the hands of her uncle, Harry.

Alfie then goaded her about going to give his pure, unstained daughter a goodnight kiss.

A tussle ensued and Hayley screamed that he wasn’t going anywhere near her baby, before pushing him away.

He went flying downstairs and hit his head on some wood.

But, rather than worrying about Alfie’s fate, viewers were concerned about the manner in which the secret spilled out.

The issue was… well, baby Cherry basically doesn’t have any hair, there’s just a covering of that lovely soft baby fluff!

Beautiful baby Cherry doesn’t have any hair so where exactly did the 3 inch lock of hair come from? I’m all for a bit of make believe at Christmas but that was seriously pushing it especially as it was part of the BIG REVEAL😂 #EastEnders #BabyCherryhairextensions

Did that baby grow hair in 5 minutes? #Eastenders

Is anyone going to talk about how they got a full lock of hair from a baby that’s clearly bald?? A lock of brown grown up hair not even baby hair?? 🤔 #EastEnders

Where did hayley get all that hair from?? Cos it certainly wasn’t from that bald af baby #Eastenders

That baby is completely bald how did she cut that hair? #EastEnders

Did you notice this? Leave us a comment on our Facebook page @EntertainmentDailyFix and let us know!