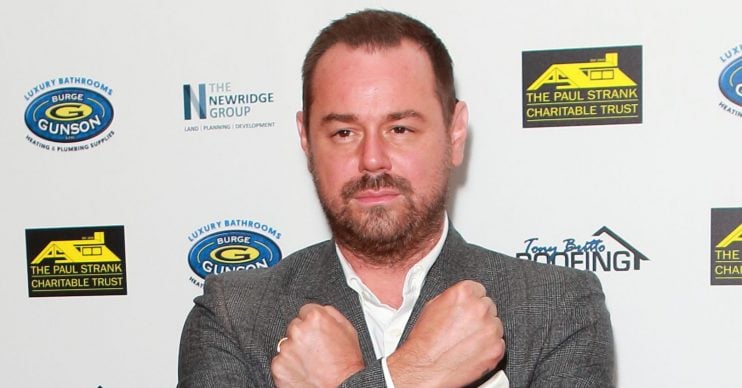 He admitted getting it out is his party trick

Danny Dyer, who plays Mick Carter in EastEnders, has confessed that one of his testicles is the size of a jacket potato.

He also told how it’s his party trick to get it out for a joke!

In an interview with Heat magazine, he said: “I’ve got a big [testicle] – just one.

“It’s the size of a jacket potato and, er, sometimes I get it out, pad it in glitter and we have a little pipe at it.”

The word ‘pipe’ is Cockney rhyming slang for look.

Danny was one of a few stars who spoke about their party trick to the magazine, however it was only him that included genitalia references!

Fans have previously talked about Danny’s package, which was evident in a picture from his holiday to Florida in 2018

Fans commented on the snap with one saying: “I see you brought ya lunch box!”

“Conceal your big bulge,” added another.

A cheeky third said: “Packing! Joanne is a lucky lady.”

Danny is currently busy on EastEnders as he films a huge storyline for Mick.

His wife, Linda Carter, is battling with alcoholism and their marriage is on the verge of breakdown.

Things will culminate in the 35th anniversary celebrations as the Carters take their regulars on board a boat on the Thames to celebrate winning the Best Pub competition.

Tragedy will strike when someone drowns.

There were rumours Danny’s alter ego would meet his maker, but Danny has seemingly put paid to that suggestion.

In an interview with The Mirror, Danny said: “Another 10 year stretch and then I’ll just take a backseat.

Who do you think will be killed off on the show’s 35th anniversary?