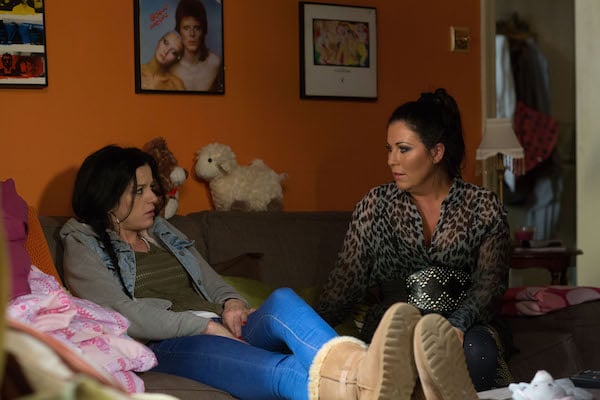 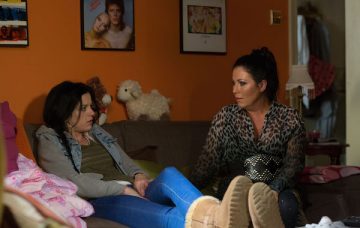 Is this the end to all the cat-fighting?

It looks like there could be a peace treaty between scrapping cousins Hayley and Kat next week when Hayley holds out an olive branch for her cousin.

Kat’s having a bummer of a week when she realises none of the studying she’s done for The Knowledge has sunk in.

When Mo suggests she buys a scooter to learn the London routes that way, Kat’s given food for thought.

She returns later with a moped which she asks Keanu to keep at the Arches for her. But why doesn’t she want her family to know?

It soon becomes clear when the Slaters discover money is missing from their house kitty and they all start blaming each other.

Kat keeps quiet and heads over to the Arches where she’s mortified to discover the scooter won’t start.

Utterly deflated she heads home where she hands the key over to the others and tells them that’s where their missing money is.

Kat then heads off to clean Ian’s new restaurant by herself as the rest of the family are too annoyed with her to help out.

Feeling sorry for herself and overwhelmed by the size of the job Kat pours herself a drink and before you know it has dropped off.

Luckily Hayley decides to check up on her cousin and wakes her up.

Kat confesses to Hayley that all she wanted to do was get loads of work and prove that she’s a good role model for her kids.

Upset at herself for messing up she announces that trying to be better is pointless and gives up and leaves the restaurant without cleaning it.

Hayley hurries after her and tells her that she’ll help her with the cleaning. Kat’s touched by Hayley’s kind gesture. But is it just because Hayley feels guilty?

It was revealed earlier this year that the father of Hayley’s unborn baby is none other than Kat’s husband Alfie Moon.

The pair had a one night stand in Spain after Alfie found out Kat had been having sex with another man while their son Ernie suffered horrific burns from a kettle.

Will Hayley tell Kat the truth? Leave us a comment on our Facebook page @EntertainmentDailyFix and let us know what you think!