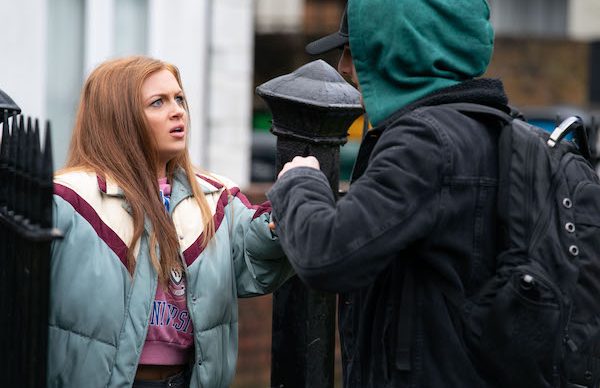 Racist arrest for EastEnders’ Keegan Baker after Tiffany is attacked

Keegan Baker (Zack Morris) is set to be the victim of a racist arrest on EastEnders, after wife, Tiffany (Maisie Smith) is attacked.

Keegan, who has previously been victimised by the police and has been pulled over on a number of occasions and searched due to the colour of his skin, will be left angry and upset when he and Tiff are the victims of a crime but he is the one who ends up being arrested.

The week begins well for Keegan when Iqra Ahmed (Priya Davdra) says that Masood has given them his old van to use for their sandwich business.

Excited at this news, the pair begin brainstorming ideas for how they can expand their operation.

However, as Keegan and Tiffany go home, they see an intruder leaving their home, and realise that they have been burgled.

The couple confront the intruder, but during the scuffle, he manages to steal Tiff’s wedding ring.

Keegan is left injured after the fight and the intruder manages to getaway. Shortly after, the police turn up and leave Tiff and Keegan astounded when Keegan is arrested.

His arrest leads to Keegan losing all faith in the police, and as a result, he becomes miserable following the burglary and his subsequent treatment.

Mitch (Roger Griffiths) and Tiff try to make him feel better. However, when Keegan bumps into Jack Branning (Scott Maslen), he has a go at him about the unjust situation with police racism and how unfair it is.

Keegan has previously told Tiff that he has been stopped and searched by the police so many times that he has lost count and was first stopped when he was just 13-years-old while on the way home from football practice.

While Keegan remains down, Mitch tries to encourage him to look to his future and prove people wrong about the impression that they have of him.

Mitch helps his son to build his business by helping him to fill in his loan application, but Keegan is clearly still struggling with what has happened.

Will Keegan be able to move past everything?