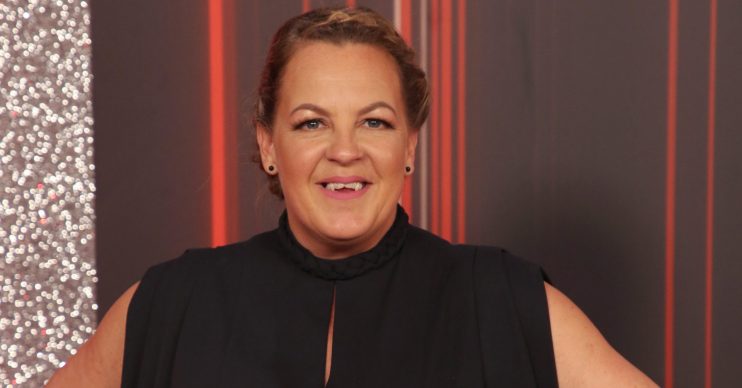 Lorraine Stanley, who plays Karen Taylor in EastEnders, has joked she has ‘won’ at Valentine’s Day after she shared the cheeky card she bought for her other half Mark Perez.

The actress posted a picture of the card on her Instagram page.

The card said: “You give me fanny flutters,” which was a phrase often used by Maura Higgins in the 2019 series of Love Island.

Lorraine captioned the post: I think my card to @markyp1977 wins! We love you baby, you’re the best! And you do, you really do… #valentines @central.23.”

One fan wrote: “You do make me laugh.”

Another commented: “This is hilarious.”

Lorraine appears to have a good sense of humour, as she previously posted her hilarious bathroom artwork.

Lorraine and Mark have a daughter together called Nancy, who was born in 2015.

The actress tends to keep her daughter’s face hidden in photos however, she did share a picture of her little girl on her second birthday back in 2017.

The actress joined the EastEnders cast back in 2017 as Karen Taylor, however Karen isn’t her first role on the soap.

In 2016, she played Linzi ‘Star’ Bragg’s mother Thelma for eight episodes and back in 2004, she played a young Mo Harris in the TV special EastEnders: Pat and Mo.

Recently Karen also managed to find love with Billy Mitchell, but her new romance hasn’t sat well with daughter Bernie, as she believed the Mitchell family killed her brother, Keanu.

As Bernie started to become suspicious as to why Karen wasn’t more worried about her missing son, Karen had to confess what really happened to Keanu.

She revealed Keanu had fled the country as Ben and Phil Mitchell wanted him dead for sleeping with Phil’s wife Sharon and getting her pregnant.

Keanu soon returned after receiving a call from Bernadette telling him Phil had left Walford, meaning he could return.

In last night’s episode (Thursday February 13 2020) Keanu went to see his mum and it seems like there could be trouble next week for the show’s 35th anniversary.

Phil returns from Portugal and Ben is determined to stop Keanu from killing Callum, who he is holding hostage.

But will everyone survive?