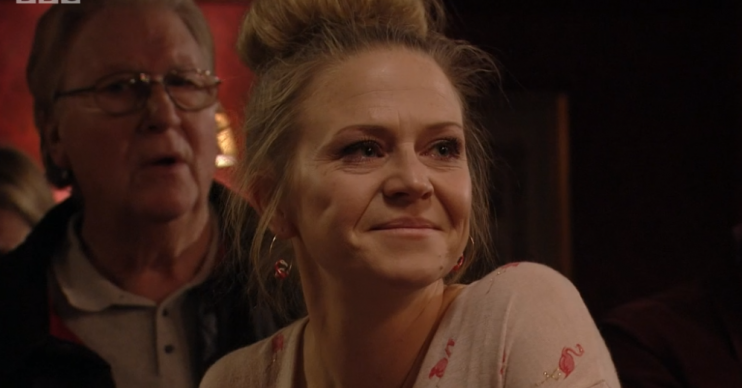 Mick announced that he and Linda were divorcing

Fans of EastEnders have hailed the soap as being ‘at it’s best’ following Linda’s humiliating outburst in the Vic.

For months Linda has been struggling with alcohol addiction and it has caused her marriage to husband Mick to break down.

Linda has also been convinced that Mick is trying to take their son Ollie away from her and is plotting against her.

In last night’s episode of the show (Thursday February 13 2020) Linda had an outburst in the pub after arguing with Mick, his mum Shirley and aunt Tina about custody of Ollie.

Speaking about Mick, Linda said: “You all think he’s so perfect don’t you? Perfect landlord. Perfect husband. But when I really need him he never actually steps up.

“Not even when his own brother raped me.”

She continued: “And what about the company this landlord of yours keeps? His best mate Stuart, do you remember him, Teen? Made your life a misery and what did Mick do? He just… stood back, he just let it happen.”

Tina attempted to stand up for her nephew, but Linda continued to throw insults his way saying he’d never face up to anything.

She then made a low blow saying: “Even when your own son has a problem, what do you do? You lock yourself in the barrel store and have a panic attack.”

Shirley ended up storming out upset and Linda said she was telling everyone what Mick is really like so they could back her up in court.

Mick then announced that they were getting a divorce.

As Linda tried to raise a glass, she ended up falling over and tried to call Mick for help.

This drama between Mick and Linda is the best scenes/storylines they’ve done since arriving.

However he looked down on her and said: “I’ll see you in court.”

Viewers loved the scene and praised the soap for the storyline, insisting it was EastEnders at its best and saying the soap has made them interested in Mick and Linda again.

I don't know when I became so invested in Mick and Linda's marriage again but it's happened. #EastEnders

as much as i love mick & linda, this storyline has made them way more interesting to watch. i’m loving all the conflict/drama between them at the moment! #EastEnders

Was Eastenders at its best again , @MrDDyer my heart goes out to Mick , and OMG , @kelliebright76 you should definitely be getting best actress award for Linda, god it’s hard to watch xx

GO MICK! You tell her! Absolutely love how he's FINALLY stopped chasing after Linda and supporting/putting her first and finally put his own feelings and himself first. This drama between Mick and Linda is the BEST scenes/storyline they've done since arriving! #EastEnders

Do you think Mick and Linda will be able to work through things, or will they split for good?

What did you think of last night’s EastEnders episode? Leave us a comment on our Facebook page @EntertainmentDailyFix and let us know what you think!