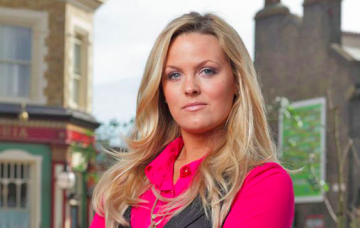 Former Albert Square lovers won't be getting back together on screen

Jo Joyner has ruled out returning to EastEnders.

The actress has played Tanya Branning on and off since 2006 and has made occasional returns when the storylines have called for it.

And now Tanya’s lover Sean Slater is making his own comeback in the coming months.

Actor Rob Kazinsky is reprising his role as bad boy Sean after ten years away, but sadly there will not be a reunion with Tanya in the offing.

Despite her on-screen lover’s upcoming return to Walford, Jo insisted she had no plans to stage a comeback.

She told The Sun: “There is always scope as long as you have got family that are in the show but not for me at the moment.”

Tanya returned most recently in 2017 for her daughter Abi’s funeral after she died trying to stop her dad Max from killing himself.

It was subsequently revealed that Abi’s death has caused Tanya to suffer a severe breakdown and she was hospitalised in a psychiatric facility.

Jo made a high-profile return in 2014 for the live episode of the show, before again returning in 2017 to expose Max Branning’s revenge scheme.

Away from EastEnders Jo currently stars in Ackley Bridge, Porters and Shakespeare and Hathaway – Private Investigators.

But if there is one person who could convince any actor to return to a soap, it has to be EastEnders boss Kate Oates.

And Jo is full of praise for the woman who revitalised both Emmerdale and Coronation Street before taking on EastEnders.

She added: “Kate Oates is formidable. Knowing her work from other shows she’s been in and I’ve met her.

“I think she is a real force and she will be great for the show.”

Do you want to see Tanya back in the Square? Leave us a comment on our Facebook page @EntertainmentDailyFix and let us know what you think!