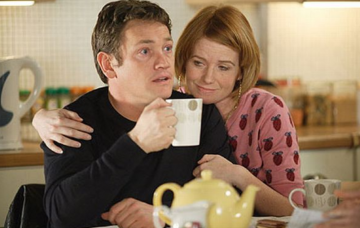 Is he returning to the Square too?

Patsy Palmer and Sid Owen have been reunited ahead of her EastEnders return later this year.

Singer/songwriter Kele Le Roc shared a picture of the two – who played Biana Jackson and Ricky Butcher in the BBC soap – hanging out together at the Chiltern Firehouse.

She captioned the snap of the three of the: “When you bring Ricky and Bianca back together.”

Patsy also shared the image on her Instagram stories, writing across the picture: “Stranger things……

“Look who I bumped into last night… @sidowen looking like him and my beautiful friend @keleleroc were getting married!”

Sid does look like he’s dressed in wedding attire!

Fans were super-excited by the picture, with several commenting: “Legends,” and another saying: “Legendary!”

Others wrote the iconic phrase: “Riiiiiccckkaaaaay!”

Someone else wrote: “Old school, love it!”

Patsy’s return to Walford was announced last month – but could Ricky be going with her?

That really would be “legendary”!

Patsy’s over in the UK from her home in Miami at the moment, and appeared on This Morning yesterday (Thursday June 21) where she revealed her real name is actually Julie – shocking hosts Phillip Schofield and Holly willoughby.

She said she tries to go by her real name in the US – but she “gets so confused” having two monikers.

The actress was born Julie Anne Harris and uses her married name Julie Merkell while socialising in Malibu, where she now lives.

But she admitted she sometimes forgets and reverts back to her work name, Patsy, so her Stateside pals now refer to her as “Patsy Julie”.

She told the hosts: “They [fans] don’t know me [in America] and I have another name. My name is Julie really, so I thought, ‘I’m going to get back to calling myself my real name.’

“So now in Malibu they call me Patsy Julie.

“Julie Anne Harris was my name, my married name is Julie Merkell.

Patsy is to return to EastEnders for a brief stint in the coming weeks, and admitted she has been keeping an eye on how her on-screen daughter Maisie Smith (Tiffany Butcher) has been getting on in Albert Square.

She added: “I’ve seen bits of what Maisie has been doing and she’s so brilliant.

“All of a sudden you go and you come back and she’s a woman. She’s so grown up and so beautiful.

“She’s such a great little actress.

“I’ve always said it’s a bit odd sometimes when major characters don’t return when it’s something that … you know.”