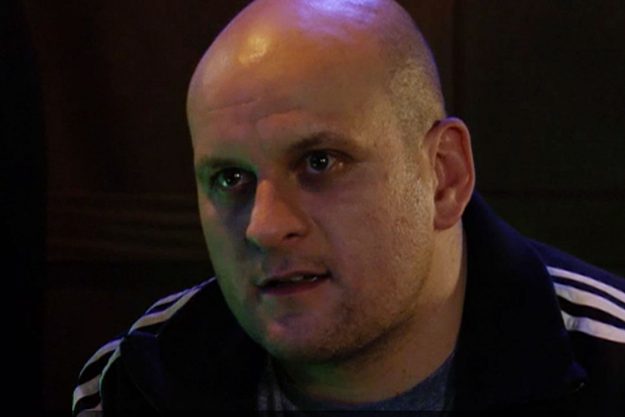 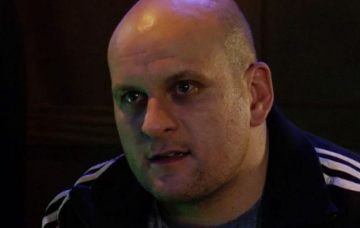 BBC viewers had shivers up and down their spines last night as their fears were confirmed – Stuart Highway really is a nasty piece of work.

He’s worried fans since he first arrived in Walford, and proved he’s nasty to women when he threatened Linda Carter last week.

But after Thursday’s (12 July) horrifying events, we know now he’s capable of much more.

When Tina returned to Albert Square after visiting daughter Zsa Zsa, she was clearly shaken to see Stuart around.

But, putting her reservations about Mick’s best mate to one side, she agreed to go to an 80s night at E20 with him.

However, fans watched in extreme discomfort as Tina suffered a horrible flashback while there…

As the D-Mob’s “We Call It Acieed” played in the background, Tina looked at Stuart and it was clear she was remembering a traumatic event from her past.

In a twisted move by Stuart, he had requested the DJ play the incriminating song – knowing it would have an affect on Tina.

As Tina dropped her glass on the floor in shock, which smashed into pieces, Stuart walked away – and fans were full of hatred towards the menacing character.

Another said: “So did Stuart rape Tina?! Stuart is such a dark character.”

A third added: “I think Tina been abused by Stuart years ago can tell her expression on her face when she saw him.”

Yes! The fact that he picked a song he knew would torment Tina brings it to a different psychological level of evil. Most of the #EastEnders villains have been more physical in how they went after ppl. Stuart is more calculating.

Betting time. Stuart raped Tina and that’s how she got her daughter. #eastenders

It’s obvious that stuart raped or molested Tina when she was younger so he’s obviously a predator! @bbceastenders #EastEnders

In a trailer for upcoming episodes, Tina vowed that she would get “revenge” for what Stuart had done.

In tonight’s episode (Friday 13 July), Tina confides in Sonia about her horrific ordeal, and is encouraged to go to the police.

She says: “There was this thing that happened and last night in the club, it came flooding back.”

So what exactly is Stuart guilty of? And how will Mick react when he finds out his best friend is a rotbag?

What do you think Stuart has done? Leave us a comment on our Facebook page @EntertainmentDailyFix and let us know what you think!