It was all a bit cringe!

It was a Valentine’s Day to remember for Walford’s Donnie Yates and Robbie Jackson in last night’s EastEnders – in more ways than one.

But sadly all the viewers will remember is yet another gaffe when Robbie told Donna – who uses a wheelchair – to run!

Cash-strapped Donna had done her best to make some wonga from Albert Square’s hapless chaps, by spray-painting white flowers red and selling them as top-price roses for Valentine’s Day.

At first the plan seemed to work.

But later, as Robbie wooed Donna with a real red rose, a hoard of disgruntled customers arrived – marching towards Donna brandishing their flowers angrily.

And that’s when Robbie said: “RUN!”

The EastEnders fans were incredulous at Robbie’s blooper.

“Did Robbie just tell Donna to run?!” wrote one. “So Robbie just told Donna who’s in a wheelchair to RUN,” laughed another viewer. “I am howling with laughter.” 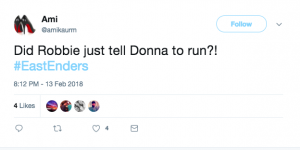 “The awkward moment when Robbie tells Donna to ‘run’,” said another. 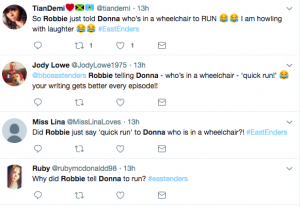 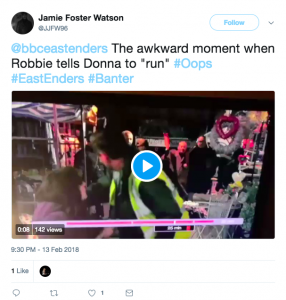 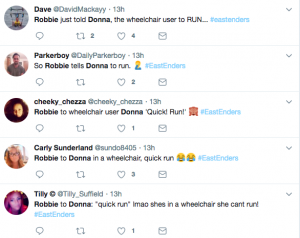 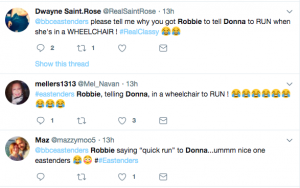 But it wasn’t all bad news.

Robbie’s romance with Donna did warm some hearts as he declared that the rose he’d given her was “the real thing” like his feelings. Awww.

One smitten viewer wrote: “Robbie and Donna are so cute.”