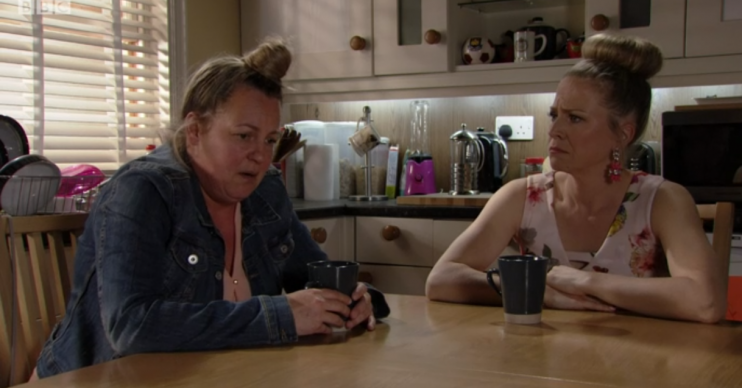 Karen's children Chatham and Riley both have autism

EastEnders viewers are loving Karen Taylor’s scenes with Linda Carter, where she gave her friend advice on dealing with her child’s autism.

In last night’s episode (July 11 2019) a photographer came to take pictures of the runners for the Walford 10K, including Mick Carter.

Mick wanted to have a picture taken with his son Ollie, who is showing signs of autism, but Linda was unsure.

As Mick insisted, Ollie went under the table and began hitting it with a spoon and Linda was unable to move him.

Noticing how upset Linda had become, Karen stepped in to take her for a cup of tea, telling her Ollie would come out when he was ready.

Karen opened up to Linda and told her about how her son Riley once had an overload on a bus because he didn’t like people ringing the bell.

She told her Riley crawled under a seat and wouldn’t come out even when they go to the bus depot.

When Linda asked what she did, Karen told her friend that she sat on the floor next to him and sang ‘The wheels on the bus’ but at the time she was in tears.

Linda went on to ask what Karen meant when she told her a couple of weeks ago to ‘be prepared for the worst’.

The mum of six explained that the toughest aspects were when other kids picked on them, and having to fill out forms constantly, writing down “every single nightmare thing” they’ve done just to prove how bad they are just to get her benefits.

Karen revealed afterwards she writes down every lovely thing about them and she said her boys are a gift to her as Ollie is to Linda.

EastEnders viewers loved that Karen was there to support Linda.

Karen is amazing. She’s quickly becoming the heart of the show ❤️ #Eastenders

When Linda returned to The Vic, she told the photographer that they were raising money for an Autism charity.

Ollie soon came out from under the table and happily posed for a picture with his dad.