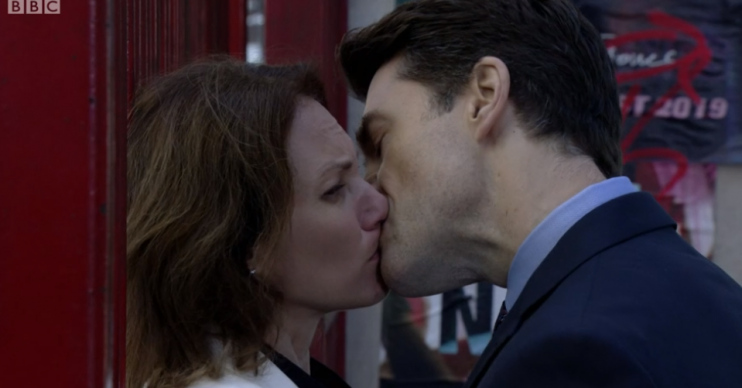 Rainie took £75k from Jack, which was then taken from her

Soap viewers were left horrified as Rainie agreed to sleep with a stranger for £30 in front of her great-niece, baby Abi.

In last night’s episode of EastEnders (July 18 2019) fans saw Rainie had begun sleeping on the streets with Abi after a man stole Jack’s money from the hotel.

She rang Stuart and left a voicemail desperately asking him for help.

Begging for money, Rainie was desperate to get some money together so she could afford a place to stay with Abi.

As she waited by the bins, a well-dressed man walked by and asked Rainie if she was working. He soon backed off when he realised she had a baby with her.

Resorting to desperate measures she told the man that Abi wasn’t hers and wouldn’t wake up.

The man rang his wife saying he would be late back due to work and the pair went off.

It soon became clear that Rainie was uncomfortable as when the man began kissing her and she couldn’t take her eyes off the pram.

She apologised saying she couldn’t go through with it but he wouldn’t take no for an answer.

As she went to hand the money back he shoved her up against the rails and it appeared he was about to rape her.

Luckily Stuart came to her rescue shoving the man off her off and yelling “she said no”.

Viewers were horrified by Rainie’s actions.

Rainie is horrible, wanting sex when she's meant to be looking after baby Abi #EastEnders

Rainie's seriously going to become a prostitute when she's meant to be looking after baby Abi??? What on earth?! #EastEnders

Oh Rainie, don’t do it…😓 #EastEnders