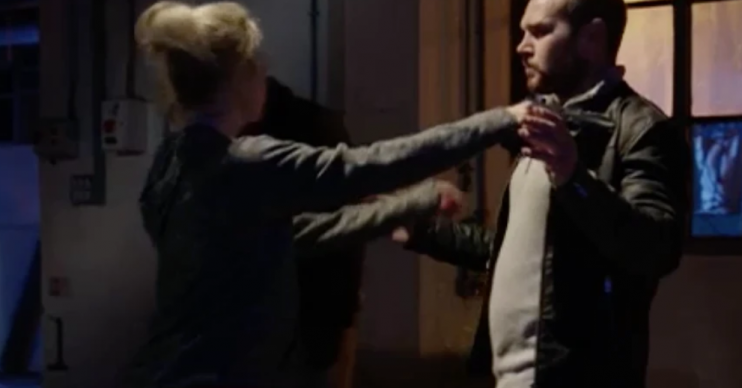 EastEnders viewers have some big questions as Linda shoots Keanu in NY reveal!

EastEnders viewers were treated to soap at its absolute best on New Year’s Day evening, as time wound back to Christmas and Keanu Taylor’s fate was finally revealed.

In the New Year’s Eve’s episode, fans discovered that Linda Carter was somehow mixed up in what happened after Martin Fowler kidnapped Keanu, with the order to kill him.

And in last night’s flashback episode we discovered her exact role. And what a role!

After being knocked out, Keanu came to in an abandoned warehouse and, shaking off the cloth tied across his face, was shocked to discover he was being held captive by Martin.

He pleaded for his life, convinced Martin was not a killer, but the regretful stall owner said there was no other way.

Managing to secretly untie his wrist restraints, Keanu then lunged at Martin and a fight to the death ensued before a gun shot rang out.

Meanwhile, we saw Linda randomly stumbling around outside, shocked by the gun shot – she had, it transpired, drunkenly got into the back of the kidnap van back in Walford!

As Martin stepped out for some air, he saw Linda and realised he would need to silence her.

At the same time, Linda clocked him and the gun and tried to do a runner.

Martin caught her and dragged her into the warehouse where she encountered Keanu (still alive!) and was told the whole saga.

From there Linda, who sobered up pretty swiftly as the adrenaline kicked in, hatched a plot to save themselves; they could fake Keanu’s death, so Ben and Phil would be satisfied the bloody deed was done, and all three of them could get on with their lives.

She then discussed how they could shoot Keanu and then film a video fake shooting him dead.

As she demonstrated what she meant, Linda shot Keanu in the shoulder!

Taking control, she then ordered him to get back up and then slump as Martin made the video of him fake shooting!

Wait! Can we talk about that Linda knew and pointed out directly where to hit Keanu in the shoulder so that there was enough blood and it would be close enough to the side of his head? It wasn’t a random guess. #EastEnders

Not only has the hooded bore “wouldn’t say boo to a goose” Martin Fowler supposed to have become a villain but a drunk Linda Carter is now suddenly a criminal mastermind too? #eastenders pic.twitter.com/cH9RmfVbPw

I’m all caught up with #EastEnders and OMG!!! The two twists I didn’t see coming was Linda being a crack shot & Sonia trying to steal money from Dot. I am disappointed that Ben wasn’t involved in the cover up, I really hoped we would see him with a conscience

Martin is a pussy. How did a drunk Linda, come up with a smart plan, take the gun and shoot Keanu on the half spin whilst holding the gun sideways with one hand. Meanwhile Martin is just blubbering for hours struggling to get the job done. #EastEnders

Actress Kellie Bright, who has also been lauded for her incredible scenes as a drunk, thanks fans for their reaction to last night’s episode.

Firstly, a HUGE thank you for all the ❤️ for last nights ep. Secondly, I want to wish you all a happy and healthy 2020. Thirdly, how many of you started @veganuary today? I started my day with a vegan loaf cake and tonight I made a vegan roast – yum! & a dog walk in the middle 😘

What did you think of the episode? Leave us a comment on our Facebook page @EntertainmentDailyFix and let us know!