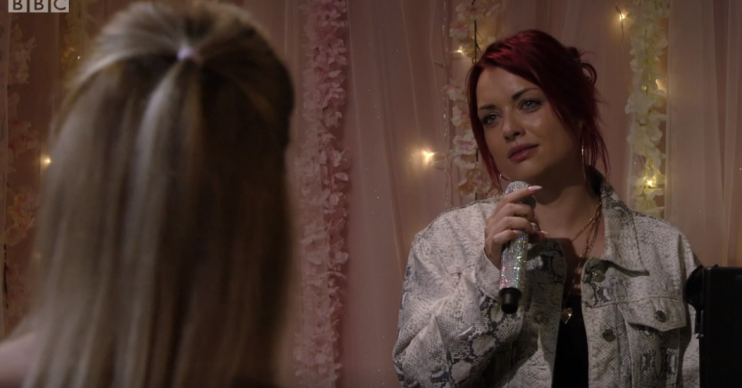 EastEnders viewers divided as Whitney attempts to out Callum

Most weren't impressed with her behaviour

Viewers of EastEnders have been left divided as Whitney attempted to tell her wedding guests the real reason she couldn’t go through with marrying Callum.

It has been a dramatic week for the Walford residents, especially Whitney and Callum.

During their stag and hen do, which was the night before their wedding, Callum told Whitney that he had cheated on her with Ben Mitchell.

Read More: EastEnders fans convinced Chantelle is pregnant and fear for her and her unborn baby

Despite being shocked and upset, it looked like Whitney was going to go through with the wedding anyway because she loved Callum and wanted her happy ending.

However, Ben revealed to the stall owner that Callum’s brother, Stuart, knew the truth and was behind him getting beaten up at Pride.

Whitney ended up walking down the aisle, but broke down during her vows and realised she couldn’t go through with the wedding.

She explained to her fiancé that they couldn’t live a lie.

Later, Stuart came to see Whitney and told her that Callum loved her.

However as she went back to the flat to see if Callum was okay, she saw him on the bed talking to Ben.

Furious that they were together in their bedroom after everything that had happened, she stormed into The Vic on Thursday September 6, and was about to reveal to everyone that Callum is gay.

Read More: EastEnders SPOILER: Phil springs into action as a gunshot rings out

However, before she could say anything, Mo and Keegan spotted Hunter walking through the pub with a gun, obviously turning the guests’ attention away.

Some viewers were disgusted as Whitney attempted to out Callum.

Me when Whitney tried to out Callum in The Vic #EastEnders #Ballum pic.twitter.com/NsAsIO7AVb

I want Whitney punished for trying to out Halfway like that. I don’t care what he did that’s a low blow. #Eastenders

WHITNEY PLS DONT OUT HIM #EastEnders

Whitney no.
U DO NOT OUT PEOPLE #EastEnders

I’ve felt so bad for Whitney throughout this love triangle, but trying to out Callum in the Vic is just wrong. #EastEnders 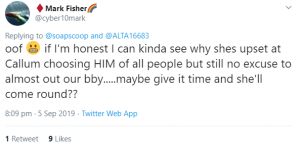 There were others, though, who understood that she was coming from a place of anger.

One even said they “LOVED” Whitney’s attempt to out Callum.

I know I shouldn’t have but I LOVED Whitney attempting out Callum’s affair with Ben in front on the entire not-wedding party. I wasn’t mad at her. She got reason to be pissed. Though I didn’t think she’d be interuppted by gunfire…. #EastEnders

Unless you’ve been in a situation where you’ve been betrayed by a lover, you may not understand the deep cutting hurt that person feels. Whitney experienced the public humiliation of calling off her wedding bc Callum wasn’t honest with her sooner. #EastEnders 1/