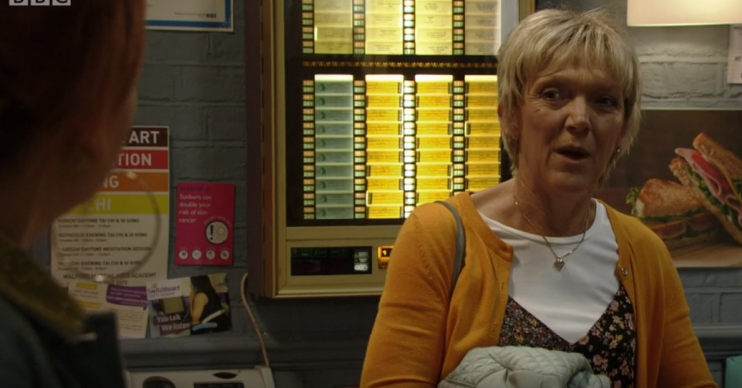 Jean was inspired by Daniel.

Viewers of EastEnders have demanded to see more of Jean Slater’s truthful side.

In last night’s episode of the soap (October 21 2019) Jean found she had been sent a USB stick with a video message from Daniel, who she believed died last week.

In the message Daniel told Jean that she was “magnificent” when she stood up for herself in the cafe.

He told her to get out there and tell the truth and left her with the words: “be bold, be brave, be Jean.”

The message left Jean inspired and she began going round, delivering some truths to the residents of Albert Square.

First to be hit with Jean’s truth bomb was Tracy the barmaid, who was told there was no filling in the pie served at The Vic.

She then told pregnant teen Louise Mitchell that she would never get her figure back and told Louise’s boyfriend Keanu Taylor he needed to take better care of his hair whilst he still had it.

However, Jean didn’t stop there. She went into Kathy’s cafe where she said the doughnuts were hard and the bacon was greasy.

Can Jean always be truthful please?

She told Stuart that he might want to question why his girlfriend (Rainie) enjoyed spending more time at Her Majesty’s pleasure instead of with him, leaving him furious.

Whitney was the next to be hit with Jean’s truths.

Jean told her she’d never get rich if she was always on a tea break and that she was probably best keeping away from boyfriends given her track record.

She the told her she was in danger of turning into Ian Beale, who she described as “one marriage after another and not worth the paper they’re written on.”

She then told Ian that his failed marriages weren’t just because of his failings in the bedroom department. Ouch.

Although Jean later felt like everyone left her after Ian told her she was the reason Stacey left, viewers have begged to see more of truthful Jean’s “hilarious” and “savage” side.

please give us more bold and honest jean i’m living for this. #Eastenders

What did you think of Jean’s comments? Leave us a comment on our Facebook page @EntertainmentDailyFix and let us know what you think!