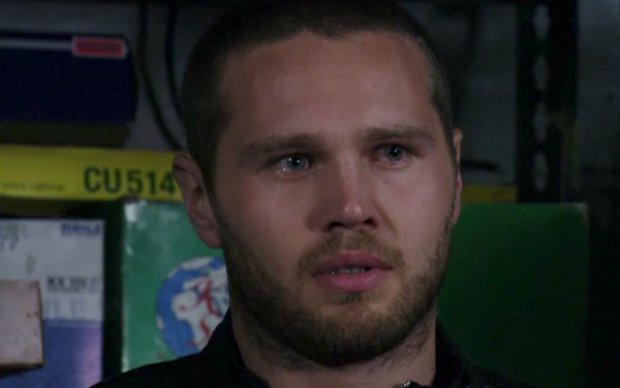 Even more shocking, Martin Fowler pulled the trigger on him… but fans are now not convinced that all is as it seems, and Keanu may still be alive…

The explosive episode saw new mum Lousie finally realise Keanu was the father of Sharon’s baby and she decided to take her own revenge with her family.

The penny finally dropped when Louise told Keanu that Sharon was unwell and Christmas dinner had been cancelled.

He panicked and worried something was wrong with the baby, and the truth dawned, with Louise swallowing down her heartbreak.

Phil then broke down in tears at Sharon’s betrayal and she tried to make him see she had chosen him, but it was for nothing and he threw her out.

Sharon was forced to move into Ian’s and, after a pep-talk she went to get her son Denny, but Phil dropped the bombshell that he was keeping him after adopting him two years ago, leaving Sharon on her own.

But the twist came when, after pretending to want to flee with Keanu to save his life, Louise set him up to be murdered.

She coolly told him: “You were right, my dad will kill you. Never ever take a Mitchell for a fool.”

OR DID HE?!! Some fans  think there’s more at play here…

One wrote on Twitter: “I don’t think Keanu’s dead. I think it’s been faked. Martin’s the real G.”

Another wrote: “The video that was shown to Ben was faked (Martin fired a shot to the side of Keanu and Keanu pretended to die by falling over) so it’s a double bluff.”

A third speculated: “Keanu is definitely not dead, and Ben knows this. Phill is gonna lose it when he finds out.”

Another suggested: “Keanu is not dead Martin and keanu rise up and take down Ben and Phil.”