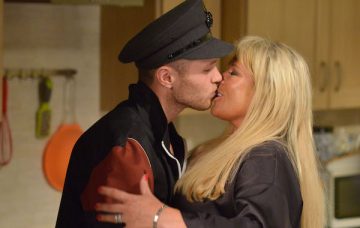 EastEnders have released a brand new trailer for Autumn 2018, and it’s packed full of drama!

Lies may break them. The truth could tear them apart.#EastEnders. Autumn trailer. @BBCOne. pic.twitter.com/kBG5jZWloO

Elsewhere, it looks like Linda Carter has well and truly turned against her husband Mick as she’s seen smashing his framed West Ham shirt onto the pavement outside the pub.

Seeming to have sided with villain Stuart, she’s seen telling Halfway and the Carter women that “Mick tried to kill Stuart”.

She says: “Mick shot him, he tried to kill him … left him for dead.”

When Mick’s auntie Tina Carter fires back: “He didn’t.”

Linda then shouts: “Open your eyes!”

Ruby is seen coming to terms with her rape, while her attacker brands her a liar.

Also, Jean discovers that Hayley’s unborn child is Alfie’s and Hayley is seen going into labour…

The trailer, which has the tagline ‘secrets are never kept’, also sees Keegan pushed to the edge after the death of his best friend Shakil.

Fans were quick to speculate over the trailer, with one observing: “Not one of these has a happy ending…”

Which storyline are you most looking forward to seeing play out? Leave us a comment on our Facebook page @EntertainmentDailyFix and let us know what you think!