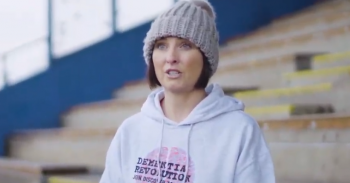 Fellow stars on the team include Natalie Cassidy, Adam Woodyatt and Jake Wood

Emma Barton says training for the London Marathon has “turned [her] life around”.

The EastEnders actress is to take part in the 26.2-mile race as part of the team Barbara’s Revolutionaries, who are running for former co-star Dame Barbara Windsor – who was diagnosed with Alzheimer’s disease in 2014 – and the 41-year-old star and Barbara’s husband Scott Mitchell wish they had taken up running “sooner”.

She said: “It’s turned my life around. I have such a love of running now – both Scott and I have said we wish we’d done it sooner.

“I honestly feel as if I can take on the world after a run.

“All of my Pinterest boards used to be cakes and dogs, but now it’s running, strengthening and sports gear.

“It’s hilarious! If you speak to the others, they’re all the same.

“Gone are the days of handbags and sandbags.”

Emma admits she had no qualms about joining the team – which includes her co-stars Natalie Cassidy (Sonia Fowler), Jake Wood (Max Branning), and Adam Woodyatt (Ian Beale) – even though she “couldn’t run further than three miles at the time”, because she misses Barbara so much.

She said: “Barbara was so dedicated and we really miss her onset. She was so passionate about the business and had time and respect for everyone.”

While Emma had no reservations about putting on her running shoes, she isn’t sure her EastEnders character Honey Mitchell would be quite so keen.

Read More: Barbara Windsor’s husband reveals she no longer recognises her home as she battles Alzheimer’s

She added to Inside Soap magazine: “I don’t know if she’d want her make-up to run. I think she’d do it, though.

“Honey’s all for helping others.

“But she’d be dressed head-to-toe in all the brightest colours of Lycra imaginable.