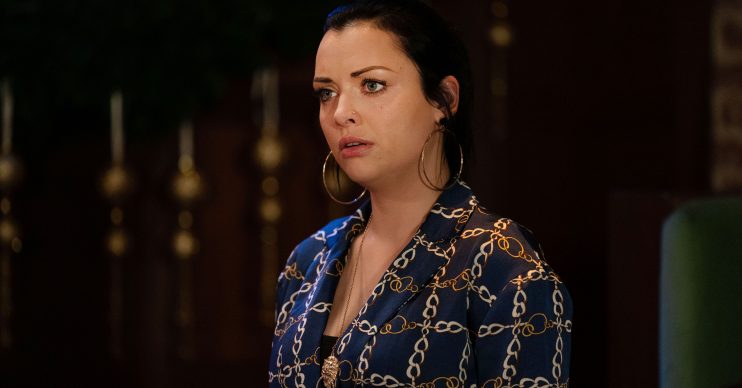 But what does he want?

Leo King’s real identity was finally exposed this week, when EastEnders‘ Whitney Dean heard the horrifying news that he was Tony King’s son.

In tense scenes, the pair had an emotional showdown – with Leo seeming to finally come to terms with his abusive father’s actions.

Viewers know that Leo turned up in Walford looking for revenge, after his dad told him he was innocent of raping Whitney.

Whitney was groomed and sexually abused by Tony for years, until he was arrested in 2008.

She later learned that Tony had killed himself while serving his sentence in prison.

After Leo embarked on a relationship with Whitney, the pair went on a mini-break – when his secret was exposed.

However, after Whitney explained in detail everything she went through with Tony, Leo eventually realised she was telling the truth and that his dad was a paedophile.

He then set his mum Michaela free from the boot of his car, and admitted that he was wrong about everything and begged for his mother’s forgiveness.

Whitney may have thought she’d seen the last of him, but new photos show Leo back in Walford.

Whitney looks shocked by Leo’s reappearance in Albert Square, but what is his next move?

This episode, which airs on Friday (December 20), also sees Leo in a scene with Billy Mitchell, and later with Chantelle Atkins – who is no stranger to scary men.

In fact, Chantelle looks even more shocked than Whitney to see Leo return.

While some viewers believe Leo is genuinely falling in love with Whitney, others predict she’ll fall pregnant with Leo’s baby after sleeping with him.

But spoilers tell us Whitney and Leo are set to have a violent confrontation at the scene of Tony’s grave.

Will Whit be okay?

Do you think Whitney could be pregnant with Leo’s baby? Leave us a comment on our Facebook page @EntertainmentDailyFix and let us know what you think!