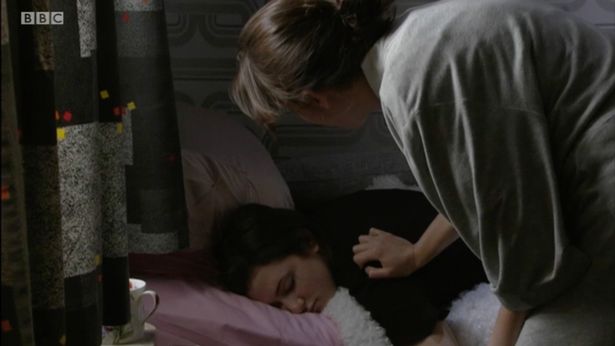 The troubled teenager tried to take her own life

Bex Fowler tried to take her own life last night, and EastEnders viewers sobbed for her.

In devastating scenes on Thursday (October 3), Sonia and Martin’s misunderstood daughter left her own party, locked herself in her room and took an overdose.

No one, apart from Lisa, suspected there was anything wrong with Bex as they all threw a surprise party in The Queen Vic to celebrate her departure for Oxford University.

But viewers have seen her struggling with suicidal thoughts, as she faces an uncertain future.

The pressure to study and ‘make her mum proud‘ has overwhelmed Bex for the past few months and she was left unable to cope with the thought of leaving Walford.

In heartbreaking scenes, Bex did the unthinkable and, after writing a suicide note to her parents, took a cocktail of drink and drugs.

In a drastic change to a normal episode of the BBC soap, there was a flash-forward to the morning after when Sonia found the lifeless body of her daughter in bed.

As many viewers worried whether Bex had died, we can reveal that Bex thankfully survives the ordeal.

Tonight (October 4), the paramedics arrive at 23 Albert Square to rush Bex away in an ambulance.

A distraught Sonia will be relieved when Bex eventually wakes up, but she can’t bring herself to believe Bex intended to take her own life.

When lodger Stuart Highway finds the note and shows Sonia, the devastated nurse can’t face the possibility that Bex contemplated suicide and immediately blames herself for piling on the pressure and academic expectation.

Dad Martin will return to Walford to support his little girl in her hour of need, feeling guilty about abandoning her two months ago to go on the run with wife Stacey.

Fans will follow Bex as she finally speaks to a mental health professional to help her through her problems – including the pressures of studying, the death of her friend Shakil and her reliance on medication.

It was announced last month that EastEnders has been working closely with The Samaritans on Bex’s heartbreaking storyline.

Soap boss Jon Sen said: “We wanted to take Bex on a journey which accurately reflected the crises facing many young people today – many of whom, like Bex, struggle under the mounting pressures placed on teenagers today.

“Having worked closely with Samaritans, our wish is that by telling this story we can encourage others in Bex’s position to realise there’s always help and there’s always hope and we hope that others will be encouraged to start a conversation if they are worried about someone they know.”