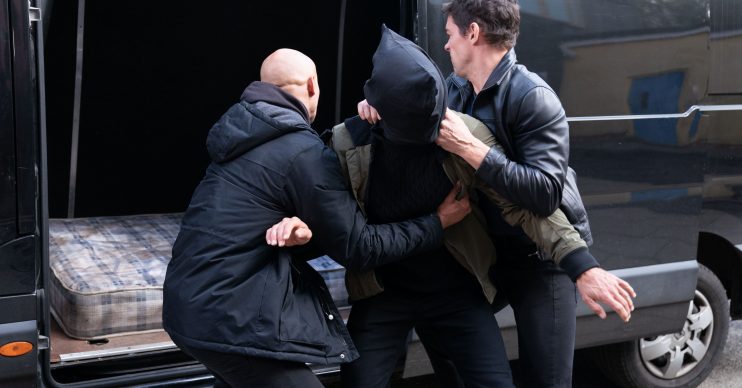 Phil is convinced Jack's the man he's after

Ben has tried to talk some sense into his dad and has even offered to sort Jack out himself, but Phil won’t be told.

Oblivious Ben has no idea Phil’s got a gun and is planning to use it on Jack!

In new pictures released by the soap today, Jack is seen being bundled into a van with a bag over his head by two heavies on Tuesday December 17.

With Jack in terrible danger, can anyone get to him in time?

And will Phil realise he’s got it all wrong?

After spotting Jack and Sharon looking cosy in recent weeks, Phil has convinced himself Jack’s the daddy.

But Phil is determined to prove that he’s not a man to be messed with, and is prepared to go to extreme lengths to make sure Jack learns his lesson…

When Jack realises what’s going on, the police officer begs Phil to believe that he’s not the one who got Sharon pregnant…

But his words seem to fall on deaf ears as Phil ramps up his revenge at The Arches.

But will he manage to persuade Phil that he’s not the right man before it’s too late?