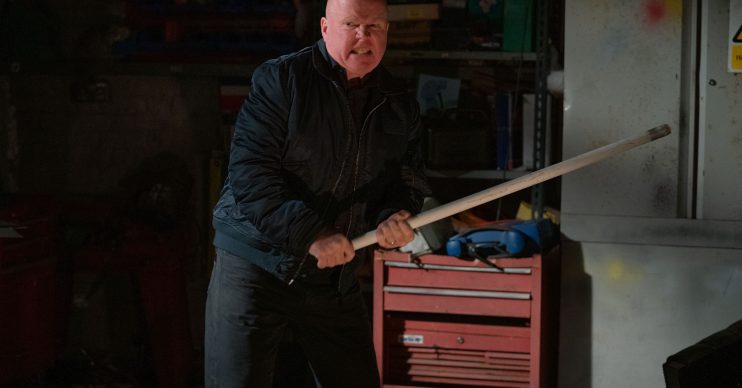 EastEnders SPOILERS: Phil goes nuts as he finds out the truth on Christmas Eve!

Phil finds out Keanu is the father of Sharon's baby

It’s going to be a dramatic week in the Mitchell household when Phil finally figures out the truth on EastEnders this Christmas Eve (December 24 2019).

Phil has figured out he isn’t the father of his wife Sharon’s unborn child but, on Christmas Eve, the final piece of the puzzle falls into place.

He discovers that Keanu is the father of Sharon’s baby and unleashes his fury in The Arches.

But what does this mean for Sharon and Keanu…?

Viewers know Keanu is engaged to Phil’s daughter Louise, however he had an affair with Louise’s stepmother Sharon last year and a one-night-stand earlier this year.

Shortly after Louise found out she was pregnant, she discovered her dad had paid Keanu to keep an eye on her as there were dangerous men after Phil.

Thinking Keanu’s love was a lie, she ended things with him and told him that she had an abortion.

A heartbroken Keanu ended up back in Sharon’s arms and the pair slept together.

Eventually Louise forgave Keanu and revealed that she didn’t have an abortion, meanwhile, Sharon also discovered she is pregnant.

A pre-birth DNA test told her that Phil wasn’t the father of her baby, and when Mel Owen got hold of the information, she blackmailed Sharon.

After Mel’s death, Lisa tried to tell Phil the truth, but he refused to listen.

However, Phil started to piece things together, but got the wrong end of the stick and accused Jack Branning of having an affair with his missus.

After taking a serious beating, Jack eventually made Phil see that he isn’t the father of Sharon’s baby.

Meanwhile, Louise and Keanu welcomed their daughter, who they named Peggy.

With the truth about to come out, where will this leave Louise?

And what will happen to Keanu and Sharon?