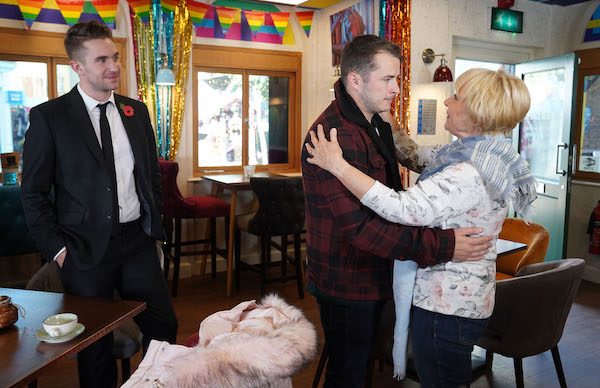 In a preview clip shared on the show’s Twitter page, Ben and boyfriend Callum make their way into The Prince Albert to meet Jay and Lola.

When they approach their friends it’s obvious Jay and Lola have a surprise for Ben.

Suddenly Pam comes up behind them and says: “If I knew we were meeting in a gay bar I would’ve worn my rainbow boa,” before hugging Ben.

She tells the businessman that she came back to collect the books and Jay told her that he would be meeting Ben.

Soon Callum introduces himself to Pam and she tells him she’s heard all about him.

But Callum looks disappointed when she reveals it was Jay who told her about him, as he works at the funeral directors.

Callum is further upset when Ben tells Pam that he and Callum are just good friends.

Three years ago, Paul and Ben were attacked on a night out.

The next day, Ben’s half-brother Ian received a call to say Ben was in critical condition in hospital and later Ian and Ben’s dad, Phil, were told Ben died.

But when they identified the body, it was revealed to be Paul who had been killed.

Ben later returned home and told his family that he and Paul were clubbing in Soho when they were attacked by four men.

They got separated and ended up taking each other’s jackets.

When Phil told Ben that Paul had died, Ben broke down.

Pam was in denial that Paul had died until she identified his body.

During a toast to Paul, Pam blamed Ben for her grandson’s death and wished he had died instead, but at Paul’s funeral she called a truce with Ben after hearing his eulogy.

But how will she feel when she discovers just how close Ben and Callum really are?

Are you excited to see Pam return? Leave us a comment on our Facebook page @EntertainmentDailyFix and let us know what you think!