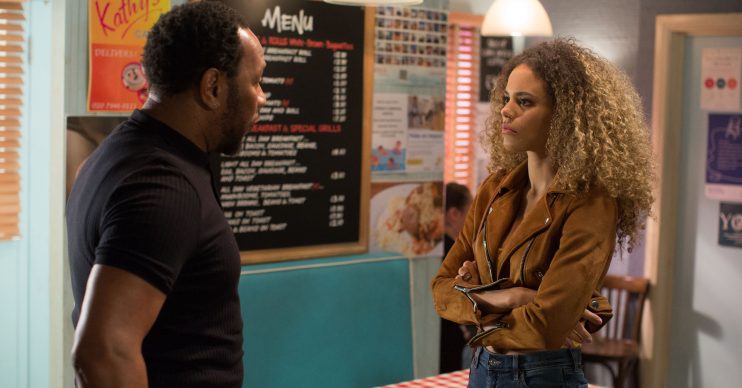 EastEnders SPOILERS: Mitch finds out the truth about Chantelle and Gray?

It looks like Mitch is getting closer to finding out about Gray’s abusive ways in upcoming EastEnders.

As Gray and Chantelle prepare for their vow renewal this Christmas, Mitch can tell something isn’t right – will he get to the truth?

Viewers know Gray is abusive to his wife Chantelle but when he discovered she was pregnant with their third baby, he agreed to get help.

After having a miscarriage, Chantelle learnt Gray got into a fight in a club, but he’s been determined to prove he can change.

Although Gray and Chantelle appear to be the perfect couple, Chantelle’s dad Mitch is suspicious of his son-in-law

As the festive season kicks off, Gray and Chantelle are excited for their upcoming vow renewal but when the venue cancels, their plans are ruined.

Gray gets angry when Chantelle fails to secure a new venue.

Filled with doubt, Chantelle scuppers the renewal and it’s not long before Mitch picks up on his daughter’s relief.

When he questions her, she’s quick to quash his doubts.

Once alone, Karen tells Mitch to make an effort and get on with Gray.

Later, Gray apologises to Chantelle for overreacting but Karen puts her foot in it when she admits to Gray that Chantelle was getting stressed about the vow renewal which leaves Gray annoyed.

Gray arranges a lunch with his wife and subtly asks her about the vows but seeing her unenthusiastic leaves him hatching a plan.

As they arrive home, all the Taylors have set up a makeshift vow renewal at No.1 but Mitch can tell everything isn’t as it seems…

Sensing something’s not right, he corners Chantelle, but she doesn’t reveal how she really feels.

Chantelle later thanks her mum Karen for everything but Karen reveals Gray was behind it all leaving her stunned.

After the vow renewal things get worse for Chantelle when Gray surprises her with a ‘honeymoon’.

Chantelle and Gray head off on their ‘honeymoon’ but Mitch is uneasy and picks up on tension between them.

Is he onto Gray?

Meanwhile with Chantelle and Gray away, Karen comes up with a plan to throw a New Year’s Eve party at No.1.