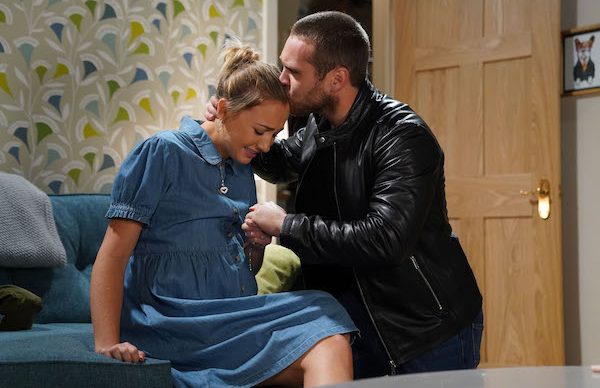 Next week’s EastEnders sees Louise Mitchell go into labour, but as always in Albert Square, things don’t go quite as smoothly as the new mum might have hoped.

Lisa Fowler’s revelation that Sharon’s baby isn’t his has been playing on Phil’s mind, and no matter how adamant Sharon is that Lisa is lying, Phil is determined to work out the truth.

And Lisa doesn’t help matters when she calls Sharon a murderer at Mel’s funeral and drops the bombshell again that Phil is not the father of Sharon’s baby.

However, as each day goes by, Keanu is desperate to keep his secret affair with Sharon hidden, and tries to convince Phil that Lisa isn’t well and that Sharon is telling the truth.

But when he and Phil walk into the cafe and see Sharon and Jack looking cosy, it’s all Keanu can do to bundle Phil out before he can make a scene.

However, just when Keanu thinks things can’t get any more complicated, he gets an urgent text from Louise demanding he comes home.

Convinced that the game is up and Louise has worked out the truth, Keanu heads home to face her fury, but he is surprised when he gets back to find her waters have broken and the baby is coming.

The pair wait for the ambulance, excited and nervous about what is to come… but across the Square Phil is confronting Sharon once again about Lisa’s accusations.

Phil feels guilty when Sharon protests her innocence, and when they learn that Louise is in labour, Phil races to the hospital to be with his daughter.

However, once there Louise is adamant that Sharon should be there and asks Phil to call her. But when he can’t get through to his wife, Phil’s convinced it is because she is up to no good with Jack.

But where has Sharon really gone? And will Louise’s baby be delivered without any further dramas?

Do you think Louise’s labour will go smoothly? Leave us a comment on our Facebook page @EntertainmentDailyFix and let us know what you think!