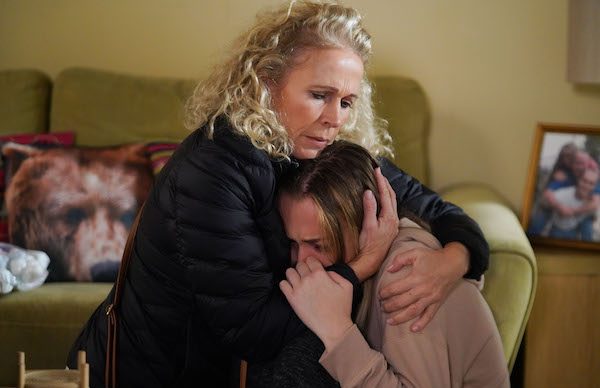 Louise Mitchell has been struggling to cope as a new mum and, with the guilt of setting up Keanu weighing her down, she starts to crack in next week’s EastEnders.

It’s Bex who spots the signs and begins to grow concerned for her friend as she struggles to cope.

Bex soon bumps into Lisa and after talking to her, Lisa is more determined than ever to help her daughter.

Meanwhile Martin notices Louise’s behaviour too and warns Ben to keep her under control.

Read More: EastEnders’ Lucy Benjamin has filmed her final scenes but isn’t ruling out another return as Lisa Fowler

Ben realises the trouble Louise could get them into and when he finally tracks her down, he issues her a severe warning.

Later everything proves too much for Louise…

As Louise opens up, the guilt proves too much and she makes a shocking confession – Keanu’s dead and it’s all her fault.

Hearing this, Lisa is convinced Louise is unwell and heads out with Peggy and calls a doctor.

Ian and Sharon overhear Lisa and when they learn what Louise said, Sharon is certain it’s not true.

Desperate to help, Lisa tells Phil and Ben everything she knows. But once alone, Phil can’t believe that Martin was the man Ben trusted to kill Keanu.

Lisa explodes at Phil, knowing Louise was part of setting up Keanu, but he reassures her Louise will be okay.

Later Phil is pleased when Dennis continues to ignore Sharon but worries when he spots the police outside the Taylors’.

As the police question Karen about Keanu, she’s quick to play things down, but the police soon arrive at Phil’s.

What will he tell them?