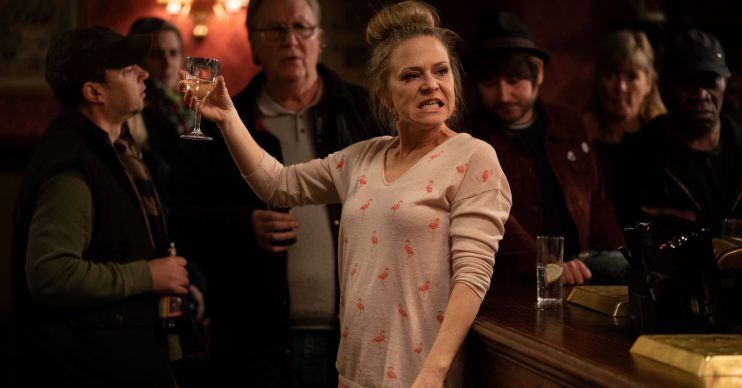 There’s no doubt Linda Carter’s drinking is out of control in EastEnders, but tomorrow night could see her push husband Mick to breaking point.

After the disastrous meeting with the social worker in which Linda put vodka in her tea, and then revealed to Loretta what had happened with Ollie on the roof of The Vic the previous week, tensions are at an all time high.

On Thursday February 13 Mick regrets the argument they had in which he told her Ollie would be better off without her.

He wants to apologise and try for the umpteenth time to sort things out with his wife, but before he can, Linda storms out.

Sharon spots her friend upset and tries to talk to her, worried as to what Linda might do next.

But Linda is more determined than ever to protect herself.

As tensions at home continue to rise, Linda decides to air their dirty laundry in front of the whole pub, making a huge announcement that will rock Mick and the regulars to the core.

Alcoholic Linda had convinced herself that Mick and Shirley were conspiring to keep her away from young son Ollie and so went to visit a solicitor to get him to draw up the paperwork before dropping the divorce bombshell.

She told Mick: “I don’t think this is working out. Any of it. I’m got to defend myself. Against you!

Speaking after the scenes went out, actress Kellie Bright, who plays Linda said: “Linda is not herself at the moment and everything is clouded by her alcohol addiction and dependency.

“She’s convinced Mick is out to take Ollie, her home and everything away from her.

“I think she believes in that moment it’s the only thing she can do to take back some power. In her sober heart, I don’t think it’s what she wants.”

Will Mick and Linda really call time on their marriage?

Next week sees the couple and their regulars head to a boat party on the River Thames to celebrate winning Best London Pub.

Disaster will strike when the vessel looks like it will sink and one character is confirmed to die in the episodes.

Mick and Linda’s names have both been rumoured in connection to the death, but will they go down as a team or a couple still at war?