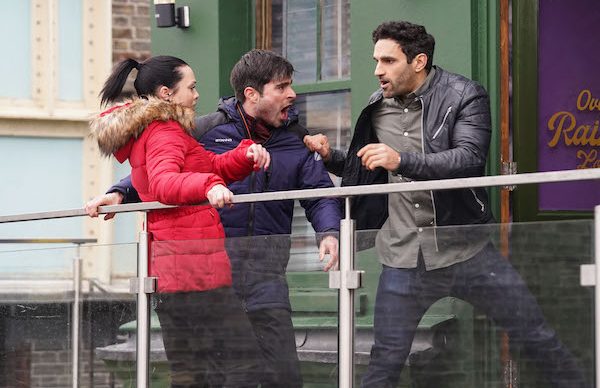 EastEnders SPOILERS: Leo dead after being attacked by Kush?

There’s life or death drama in next week’s EastEnders when Leo King falls from the balcony at the Prince Albert during a scuffle with Kush Kazemi.

Leo has been causing trouble for poor Whitney Dean ever since she found out that he was the son of paedophile Tony King, who abused her when she was younger.

But not only is Leo now making Whitney’s life a misery by following her everywhere she goes, but he has even gone one step further and set up a market stall opposite her pitch, meaning she now has no way of getting away from him.

But since Kat got involved in trying to protect Whitney from Leo, she has also found herself on the receiving end of his games when he tried to sabotage her cleaning business.

However, next week sees Leo up to his old tricks as he lashes out at Kat in the middle of the market, and soon she is seeing red and giving as good as she gets.

As Kat trashes Leo’s stall in anger, Martin, Kush and Whitney take her to the pub to cool down, and the gang are soon thrilled when the police arrive to take Leo away.

Everyone is pleased that the police have finally caught up with dangerous Leo, and they all decide to head to the price Albert to celebrate.

But sadly for Whitney Leo isn’t with the police for long and he soon tracks her down at the bar and corners her on the balcony.

But Kush is looking out for his friend and quickly rushes to Whitney’s aid.

However he will soon regret his knight in shining armour act when Leo gets accidentally shoved off the balcony during a scuffle.

Everyone is horrified at what has happened, and despite the fact it was a genuine accident, Kush can’t help but feel horrendous.

As Kat and Martin take over to protect Whitney and Kush from everyone knowing what really happened, Whitney races down to check that Leo is okay.

An ambulance is called and Leo is rushed off to hospital, but will he survive?

Kush is determined to do the right thing and come clean to the police, but Kat is adamant that he needs to lie to protect himself, and soon the police arrive at the Slaters’…. but what will he tell them?

Later in the week Whitney makes an alarming discovery that changes everything… but what truth has she just uncovered?

Do you think Leo will survive? Leave us a comment on our Facebook page @EntertainmentDailyFix and let us know what you think!