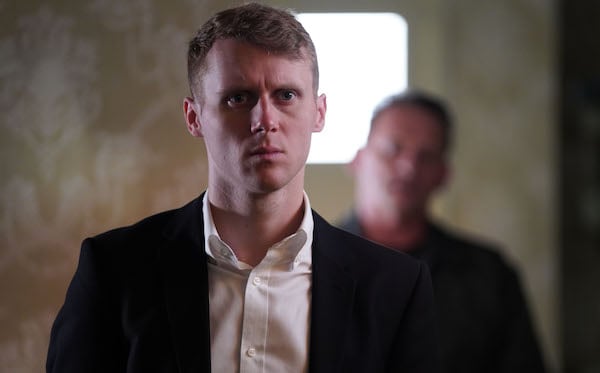 EastEnders SPOILERS: Jay’s organises the funeral of the man who killed his dad

Has he got revenge in mind?

Jay Brown’s past comes back to haunt him in next week’s EastEnders when he is faced with organising the funeral of Terry Bates… the man who murdered his dad.

It might have been more than a decade since Jase Dyer was brutally murdered by dangerous gang leader Terry, but the memory of losing his dad is still fresh for Jay.

Next week sees Jay and Lola planning a fun day out with Lexi, only for their plans to be ruined when he gets a new booking at the funeral parlour.

However, while Jay is miffed at having to miss the day out with Lola, nothing can prepare him for the shock of whose funeral it is he will be organising.

Jay and Callum are amazed at the scale of the funeral they have been asked to organise, but as soon as he sees the name Terry Bates, Jay realises this is one send off that he doesn’t want to be involved in.

EastEnders fans will remember that back in 2008 Jay’s dad Jase was killed after a job went wrong while working for Terry and his gang.

After being sent on a job to collect £100,000 for Terry, Jase had come up with the plan to steal the cash and split it with Billy Mitchell, who he had roped in to be his getaway driver.

However, Terry was one step ahead of Jase and Billy and had worked out what they were planning… leading to him getting the ultimate revenge by killing Jase while Billy hid in the toilets.

The fact he hadn’t saved his friend’s life has always haunted Billy, but after moving on, he has since become a father figure for Jay. But it seems even Billy can’t talk Jay out of how he is feeling when the funeral booking comes in.

Callum is shocked when he sees just how much Jay hates Terry and calls Ben to ask him for help while Lola comforts Jay.

But with his past coming back to haunt him in a way he never thought possible, it seems that Jay might be planning revenge.

The EastEnders autumn trailer has revealed that he is planning some sort of vendetta… could it be Terry that he is plotting against?

Billy and Jay have a heart-to-heart after Billy discovers from Lola that Jay is in a bad way… but will Billy manage to persuade Jay to leave the past in the past?

What do you think Jay will do? Leave us a comment on our Facebook page @EntertainmentDailyFix and let us know what you think!