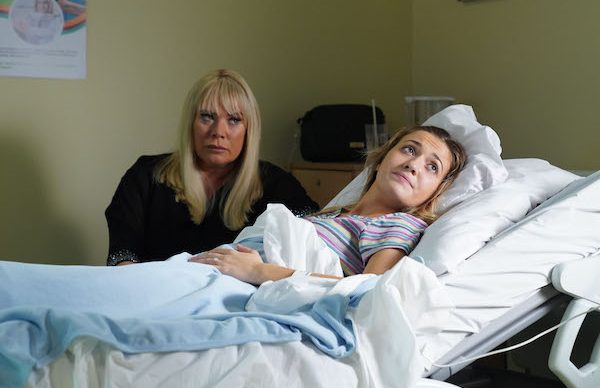 EastEnders SPOILERS: Horror for Louise when her baby stops breathing

Will the newest addition to the Mitchell family be okay?

Next week’s EastEnders sees terror for new parents Louise Mitchell and Keanu Taylor when their baby stops breathing and doctors have to fight to save her.

Just when we thought the lead up to Louise’s baby’s arrival was dramatic enough, it seems there is plenty more drama to come next week when Louise and Keanu don’t get off to the best start with their daughter.

After giving birth to a little girl, Louise is on cloud nine. But as she and Keanu start to get to know their new addition, Louise’s mind turns back to Sharon and she wonders where she was during her labour.

Louise quizzes Sharon about where she was when she needed her the most, leaving Sharon to panic as the new mum starts to grill her.

But thankfully for Sharon, she is saved by the bell when the Taylor clan descend on the hospital and her conversation with Louise is soon forgotten.

Karen, Keegan and Bernie are thrilled to meet the latest addition to their family, but the happy mood is soon short-lived when Lisa arrives to see her daughter.

Lisa is adamant that she is going to tell Louise the truth, and Sharon is terrified that the cat is about to be let out of the bag.

However, luckily for Sharon, Lisa’s need for revenge is soon in the past when she meets her new granddaughter for the first time.

Lisa is determined to protect her daughter, but before anything more can be said, there is panic when Louise’s baby stops breathing and doctors and nurses rush in to save her life.

But with the news that Keanu’s about to have another baby soon to be revealed, Louise’s happiness won’t last.

Later when Lisa sees Keanu taking Louise up to intensive care to see their daughter, she is touched by how caring he is and wonders if it is worth revealing the truth and shattering Louise’s world.

How much longer will Lisa wait before dropping the bombshell on her daughter?

Are you looking forward to the truth about ‘Sheanu’ coming out? Leave us a comment on our Facebook page @EntertainmentDailyFix and let us know what you think!