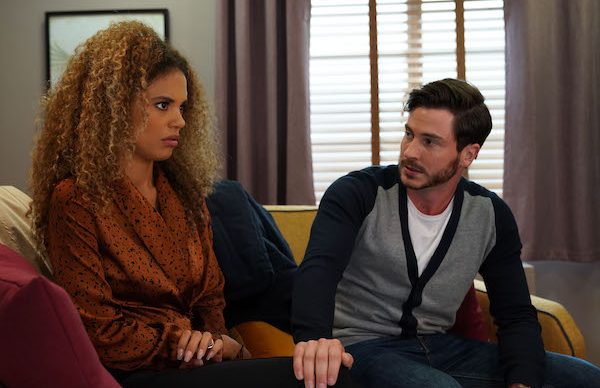 The walls are closing in on Gray...

Gray Atkins finds his world starting to crumble around him in next week’s EastEnders when his wife Chantelle finds out he has been keeping secrets from her.

To the outside world, Gray looks like a respectable business man, a good husband and a dedicated dad to his two young children.

But of course, EastEnders fans know that what goes on behind the closed doors of number one Albert Square is very different, and that Chantelle’s husband is harbouring a dark side that only his wife knows about.

Despite the fact Gray has made endless promises to Chantelle that he is going to change his violent ways, his abuse towards her shows few signs of stopping… and it seems he doesn’t just lash out at home.

Recently Jack Branning has been round to question Gray about a fight that he had in a nightclub, and until now Gray has managed to keep it a secret from Chantelle.

But the cat was let out of the bag when Denise Fox told Chantelle about it and, not wanting her boss to think her husband kept secrets from her, Chantelle pretended she knew all about the fight.

However next week Chantelle does more digging about her husband’s night cub brawl, and she quizzes Jack about what happened.

Chantelle is shocked when Jack reveals the fight was started by Gray, so she heads home to confront her husband.

But she soon lives to regret angering him when his temper starts to flare and as he sees red, she admits that she is scared of him.

Gray is brought crashing down to earth when his wife reveals he terrifies her, and she begs her to come with him to his next therapy session.

But while Chantelle is happy to support him, things don’t quite go to plan once they’re there.

With their marriage hanging by a thread, it seems there might not be any going back for the pair, and with his therapy not working out, can Gray ever really change his ways?

As Gray admits to Chantelle that he is terrified she is going to leave him, she reassures him that it’s not going to happen.

But is she just saying the right things to keep the peace?

Do you think Gray can ever change his ways? Leave us a comment on our Facebook page @EntertainmentDailyFix and let us know what you think!