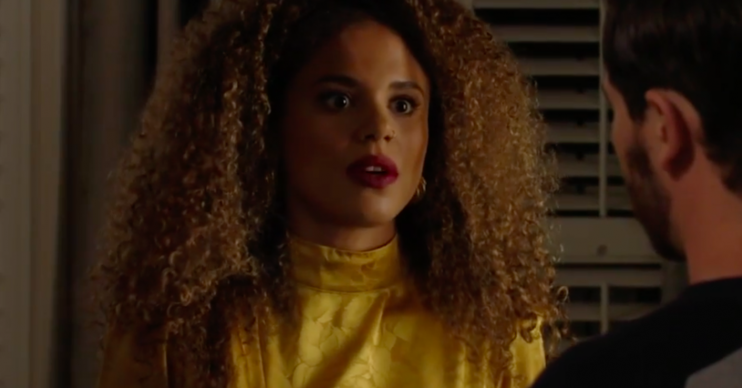 EastEnders SPOILERS: Gray’s darkness returns over Christmas as he and Chantelle renew vows

Chantelle Atkins looks set to have a terrible Christmas as her husband Gray’s darkness returns in EastEnders.

As the festive season approaches it looks like Gray’s disturbing and abusive behaviour could flare up and put Chantelle in danger again.

Viewers have watched as Gray has taken steps to try to change his violent ways.

He has abused and beaten Chantelle repeatedly throughout their marriage and only stopped when she fell pregnant with their third child.

But after she suffered a tragic miscarriage and kept it a secret from him to avoid further beatings, Gray has tried therapy to change his behaviour.

However, a setback with their planned vow renewal when the venue cancels their booking sees his mood sour and his angry side will read its head again.

As Chantelle struggles to find a new venue, Gray loses his temper again putting doubts in Chantelle’s mind about whether she wants to be with him.

She purposefully destroys any hope of a vow renewal before becoming relieved that it won’t happen – something her dad Mitch notices with interest.

And when Gray apologises for his overreaction, he is plunged back into it when Karen tells him Chantelle was stressing over the renewal itself.

He decides to manipulate Chantelle into doing what he wants and sets about getting the Taylors onside.

Chantelle has no idea what she’s in for when she arrives home to find her family in her house having set up a vow renewal there for the couple.

Mitch sees his daughter’s discomfort and tries to get her to open up, but instead she ignores it and thanks Karen for pulling it all together – and is horrified to realise Gray was behind it all.

Things get much worse when Gray then surprises her with a honemoon where she will be trapped alone with her abusive husband.

But with Chantelle clearly worried, Mitch sees what’s going on and tries to put two and two together – but will he be able to before Gray hurts Chantelle again?

Do you think Mitch will catch Gray? Leave us a comment on our Facebook page @EntertainmentDailyFix and let us know what you think!