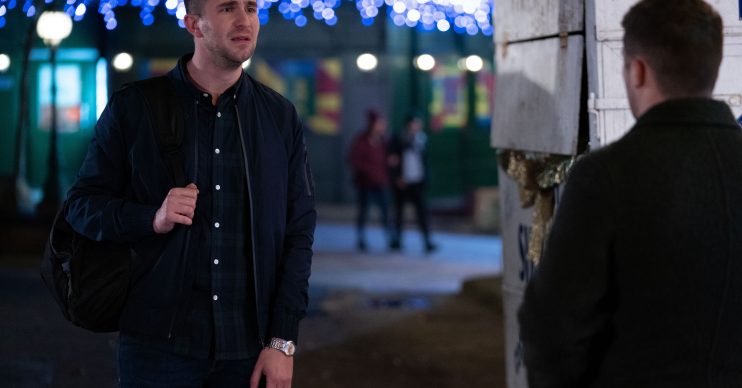 EastEnders SPOILERS: Ben and Callum to split this Christmas?

With Callum’s other half, Ben Mitchell, preoccupied with helping dad Phil get revenge, it’s little wonder Callum’s feeling a little lonely this Christmas in EastEnders.

New pictures of the pair show an anguished looking Callum with a bag slung over his shoulder, handing Ben a gift.

We can’t see Ben’s reaction, but does the look on Callum’s face say it all? Are these two heading for splitsville?

The exchange between the pair takes place on Christmas Eve, but Ben has other things on his mind as Phil has uncovered the truth about Sharon’s baby.

Viewers have known for months that the baby Sharon is carrying is not Phil’s, but actually Keanu Taylor’s.

To make matters worse, Keanu has become like a son to Phil as he’s engaged to Phil’s daughter, Louise, AND she’s also recently given birth to his child.

But at the moment, Phil is convinced Jack Branning is the father after spotting several intimate exchanges between Jack and Sharon.

The consequences will be far-reaching and Keanu actor Danny Walters has teased to Digital Spy: “Keanu is teetering on the edge of danger definitely.

With Keanu set to exit, it seems certain this will play out as his departure plot.