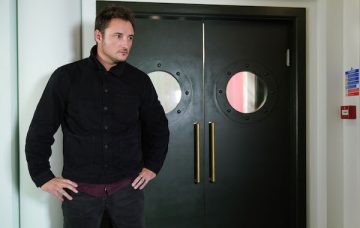 But where is Stacey?

Martin Fowler is heading back to Walford, EastEnders has confirmed.

The stall holder left in a hurry earlier this year, when wife Stacey clobbered Phil Mitchell over the back of the head – leaving him for dead in The Arches.

Fearing for their lives, the pair fled Albert Square – and left their worried families behind.

Unbeknownst to Martin, in his absence, daughter Bex has been falling apart at the seams.

This week, the BBC soap confirmed the troubled teen would attempt to take her own life in the coming weeks.

Newly released teaser spoilers reveal that the week commencing October 7 will see Martin return to Walford – without his wife.

As well as dealing with his daughter’s devastating suicide attempt, Martin also has to contend with Ben Mitchell.

All we’re told about Monday’s episode is that “Sonia gives Martin a tough reality check”, while Friday’s visit to the soap sees “tensions reach boiling point between Ben and Martin”.

A spokesperson for the soap recently revealed that Bex would attempt to take her own life on the eve of her intended departure for Oxford University.

When Sonia finds her unresponsive in bed and calls an ambulance, Stuart finds a suicide note that confirms she’d planned to kill herself.