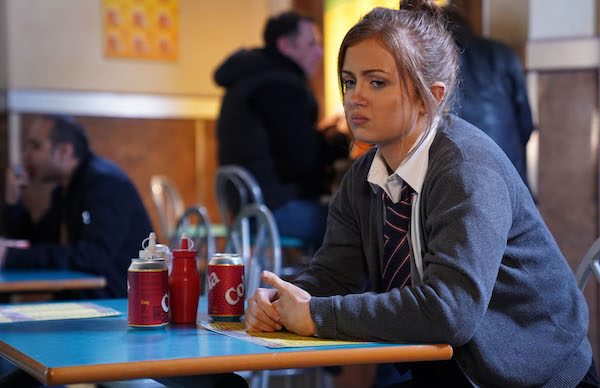 The pair grow closer than ever next week

Next week’s EastEnders sees everyone struggling in the aftermath of Dinah Wilson taking her own life, and as families pull together, united in their grief, Keegan and Tiffany grow closer.

Soap fans will see heartbreaking scenes in this week’s EastEnders as Dinah decides to end her suffering by taking her own life, and obviously no one is more upset next week than little Bailey Baker.

But the tragic events have also hit Keegan hard, and with it also being the year anniversary of his best friend Shakil Kazemi’s death, the teenager is having a tough time.

Over recent weeks fans will have seen Keegan and Tiffany grow closer as they spend more time together, and next week Tiffany offers Keegan her support as she spots that he is struggling.

But Keegan is more interested in looking after his little sister, and he and Tiffany do their best to support the nine-year-old in the wake of her mum’s death.

As Keegan and Tiffany bond, it is clear that there’s a spark between the pair and they eventually share a kiss… but what will Bernadette say?

Bernie has been in love with Tiffany for months, and even the fact that her love is clearly not reciprocated in the way she wants, she can’t help but have feelings for her best friend.

To make matters worse, Bernie also confesses that Brooke has broken up with her and she is devastated to find herself alone once again.

Tiffany feels awful that Bernie has been dumped and goes behind her best friend’s back to meet Brooke and find out why she ended things.

But as the pair meet in McKlunky’s, Tiffany is stunned when Brooke reveals the real reason her and Bernie didn’t work out.

How will Tiffany deal with the revelation, and will it put an end to Tiff and Keegan’s romance before it has even begun?

Do you think Keegan and Tiffany make a good match? Leave us a comment on our Facebook page @EntertainmentDailyFix and let us know what you think!