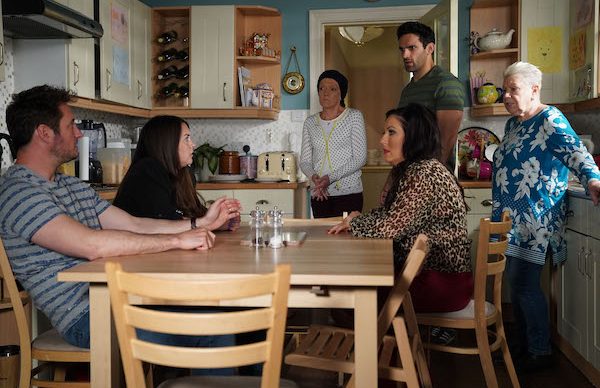 EastEnders SPOILER: The Slaters at war

Family drama is starting to take its toll on Jean

There is drama at the Slaters’ in next week’s EastEnders when Kush Kazemi ups his plan to get custody of son Arthur, but it is Jean Slater who ends up suffering when her health takes a turn for the worst.

Stacey and Martin were left stunned recently when Kush revealed he wanted joint custody of his son Arthur, and with Kat dating Kush, the battle over the toddler has ended up tearing the family apart.

With Kat firmly in Stacey’s bad books, things are set to get worse next week when a letter arrives from Kush’s solicitor, leaving everyone in turmoil.

As Jean tries to keep the peace at home, she calls a meeting for both sides to talk things through, but in usual Slater style things soon get out of hand and everyone starts shouting.

But sick Jean can’t cope with the stress of everyone arguing and she soon becomes unwell… leaving Stacey more angry than ever that the situation is upsetting her mum.

After tending to Jean, Stacey heads over to see Kush and tells them she is hiring a solicitor herself.

But while Kush should be pleased that his case is getting somewhere, he starts to realise this could become an expensive battle, and wonders how he is going to pay for it all.

But little does he know, Kat has got her secret stash of cash that Alfie got from Phil, and she reassures him that it will all work out.

As Jean’s health takes another turn for the worst thanks to family stress piled on top of having chemotherapy, Stacey and Kat are at loggerheads once again. But Kush is starting to panic that he has started something he can’t afford to finish.

Breaking down to Kat, Kush tells her that he doesn’t want to ask his mum for the money, and eventually Kat confesses she has got some savings and will pay his legal fees.

Kush is over the moon, but it seems Kat might have jumped the gun a bit by promising to foot the bill, because when she goes to the Slaters to get the money, she is horrified to find it’s missing.

Kat confronts Mo and Stacey about her cash, but they both play dumb… and it’s only when Kat goes to the market to tell Kush what has happened that she overhears Martin and Kush arguing and she starts to wonder if Martin is the thief.

Kat calls a meeting about the stolen money and as Stacey defends her husband, Martin reveals he didn’t even know there was any hidden money, let alone steal it.

As the penny drops for Stacey and she realises that Kat wanted to use the money to help Kush, she is fuming and starts to lose her patience when she later finds Kat searching her room searching for her missing money.

But if none of the Slaters have got the cash, who has stolen it?

Who do you think has the missing money? Leave us a comment on our Facebook page @EntertainmentDailyFix and let us know what you think!