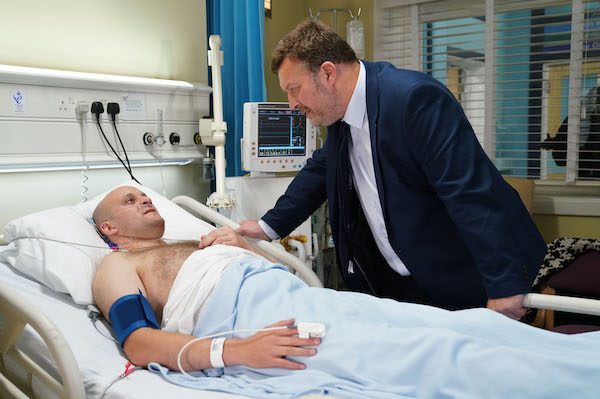 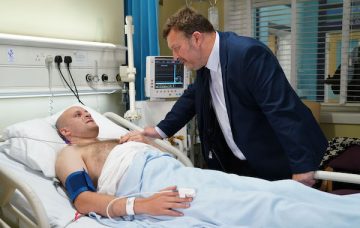 Will he finally be able to set the record straight with the police?

Stuart Highway is brought round from his coma next week and the Carters hope it will end the drama about who actually pulled the trigger that night.

Little do they know that this is only the beginning of the drama.

Despite the update, Shirley remains convinced that it was Dylan who pumped Stuart full of lead and she is determined to prove it.

When Stuart comes round Halfway storms out of the room and tells Whitney that although he’s glad his brother isn’t dead he can’t forgive him for everything he’s done.

But then Stuart asks for Halfway to talk to him and he finally reveals who the shooter was – Mick.

Halfway is knocked for six and as his brother makes a statement to the police, he recruits Whitney to help him warn Mick that Stuart has named him.

Stuart seems to be enjoying himself as he tells the police his story while Halfway rushes to the pub to tell the Carters. Mobiles not working guys?

Linda and Mick half consider making a run for it, but Mick decides there’s no point and waits for the inevitable.

As the police arrive and arrest him, Halfway makes a worrying realisation.

Later, while the Carters are reeling from Stuart’s accusations, Halfway gets a call from Zara who says Stuart is about to make his official statement to the police.

But it all becomes too much for Linda who storms the hospital and demands that Stuart take back his lies.

The police aren’t impressed with her and lead her out but she begs Zara to listen to her because she’s telling the truth.

Zara hits the family where it hurts and tells the police that Stuart’s version of events is correct.

Mick has his bail hearing later that week and calls Linda to help him when his inexperienced solicitor arrives.

Can Linda help? Or is Mick looking at a stint in the Big House?

Did Mick shoot Stuart? Leave us a comment on our Facebook page @EntertainmentDailyFix and let us know what you think!