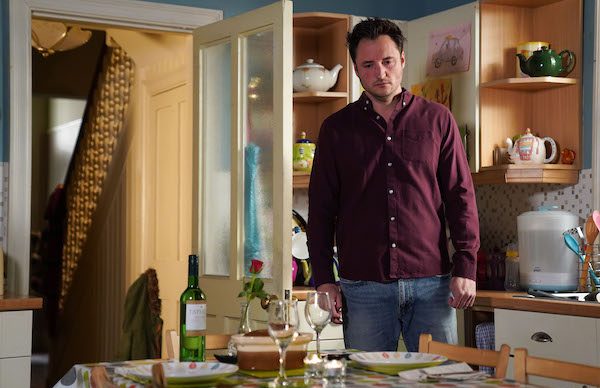 Is this the beginning of the end for the Fowlers?

There’s trouble on the cards for EastEnders‘ Martin and Stacey Fowler as Max Branning comes between them once again.

Next week sees Stacey decide to organise a romantic meal for her husband in an attempt to make things up to him. But it doesn’t take long for Max to take her mind off Martin once again.

Max is still down in the dumps about missing his granddaughter Abi, and Stacey gives him some stern advice about what his next move should be.

But when he hurts his hand on some broken glass from a picture frame, Stacey tends to his wounds and makes a shocking discovery as she helps him.

And when she finally does speak to her husband, she is shocked at how understanding he is about what is going on, and tells her it doesn’t matter she’s missed their date night dinner.

And it seems Martin is right to be worried, because after Max makes a shocking admission to Stacey that evening, she ends up staying the night.

Stacey is horrified when she wakes up and races home. Martin isn’t happy and Stacey promises to make it up to him with another meal, but when he realises she has made extra for Max, Martin can’t help but be angry.