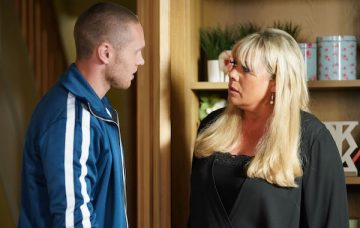 Keanu Taylor and Sharon Mitchell could be in a whole world of hurt soon when they realise that someone is onto their affair.

They’re almost caught kissing when Keanu shows his new business cards to Sharon, but she realises they didn’t get away with it when she gets an anonymous text later saying someone knows about their fling.

Read more: First looks at next week’s EastEnders in pics

Sharon is mortified and Keanu tries to comfort her but things suddenly get a whole lot more serious for the couple when the anonymous texter sends a very incriminating bit of evidence to Sharon.

It’s not enough to put them off seeing each other though, in fact it actually has quite the opposite effect as the pair are pushed closer as they try to work out who’s onto them.

Later, they both receive messages from the unknown number – and they’re issued with a stark ultimatum. What will they do?

Danny – who plays Keanu in the BBC soap – revealed to the Radio Times that the pair would be caught out, and it might bring back some memories for long-term fans.

“The way I’ve played Keanu is that this is genuine love. If it’s not, it all becomes about mind games and strategies – and that’s not really Keanu’s style.

“He’s a genuine guy who wears his heart on his sleeve. He’s really fallen for Sharon and the stronger the chemistry between the characters becomes, the harder it will be for them to resist each other.”