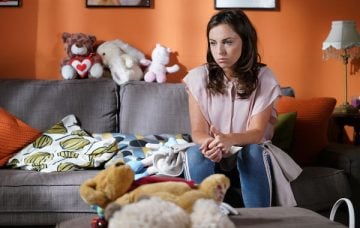 She can't get her head round what has happened

Ruby Allen struggles to cope next week in the aftermath of her rape by one of Martin Fowler’s friends.

Early in the week she arrives to see Stacey, in a state, and shows her friend some cruel comments online about her.

Stacey is livid and becomes convinced Martin’s mates are behind the comments and has a go at him about it.

She then tells Ruby that she really needs to go to the police unaware that Martin has some new information about events that night.

He shares the info with Stacey who – wanting to make sure Ruby has everything clear in her head – asks her to talk her through exactly what happened.

But after talking to Stacey, Ruby loses her nerve and decides she doesn’t want to go to the police after all.

Seeing how difficult Ruby is finding the whole situation, Stacey opens up to her friend and tells her all about her rape experience and what she ended up doing after not going to the police.

Quick recap – she bludgeoned her rapist Archie Mitchell to death with the bust of Queen Victoria from the pub.

Realising that Stacey understands and emboldened by her words, Ruby finally heads to the police station.

Will she go through with making a statement?

It was revealed earlier this year that Ruby would be at the centre of a rape storyline which would bring the issue of consent into the public arena.

Louisa Lytton who plays Ruby said: “As someone that has been part of EastEnders before, and as a viewer of the show, I know the impact a storyline such as this can have.

Is EastEnders right to tackle this subject? Leave us a comment on our Facebook page @EntertainmentDailyFix and let us know what you think!

EastEnders continue tonight at 7.30pm on BBC One