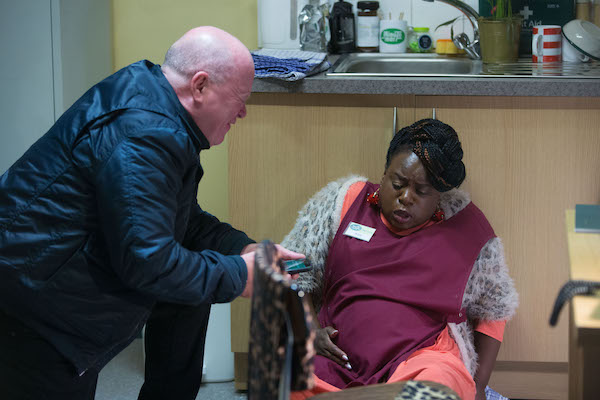 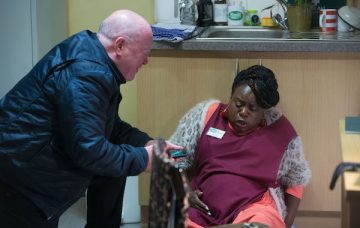 From mechanic to midwife...

There’s a Christmas surprise heading for Phil Mitchell next week when he finds himself reluctantly delivering Kim Fox-Hubbard’s baby on Christmas Eve.

The mean and moody Mitchell is set to get more than he bargained for when he pops to the Minute Mart next week, only to find an unexpected chain of events lead to him being locked in the store cupboard with shop worker and mum-to-be Kim.

But if being in a confined space with the woman who’s husband’s mysterious disappearance you played a hand in wasn’t awkward enough, Phil’s day is set to get even worse when Kim suddenly goes into labour.

EastEnders fans will remember that Phil was behind Vincent Hubbard’s sudden disappearance after he sided with gangster Aidan Maguire after the dramatic heist that took place at the start of this year.

But Kim has no idea that Phil knows more about her husband’s disappearance than he is letting on.

As the much-anticipated Walford carol concert takes place next week, Denise is worried when Kim, who reckons herself as the star of the show, doesn’t turn up in time.

Knowing her sister wouldn’t miss her moment in the spotlight unless it was for a very good reason, Denise goes to track Kim down, only to see an ambulance outside the Minute Mart.

Unbeknownst to Denise, her former fling Phil has just been forced to help Kim as she gave birth – something we never thought we would ever see a Mitchell man do!

Fearing the worst, Denise races to the shop, only to find she is an aunty again as she spots Kim cradling her newborn.

Despite her new baby’s slightly dramatic entrance to the world, Kim is in high spirits by the time she is out of hospital.

But of course Denise sees through Kim’s act and can see her sibling is already struggling without Vincent by her side during one of the most important moments of her life.

But it seems there could be an unlikely bond forming between Phil and Kim after the labour… and when Kim decides to host a belated Christmas dinner for the family because she missed out on the official one, she also invites along Phil.

Despite being Kim’s knight in shining armour, Phil turns down her invitation, until a run in with Ray makes him change his mind and he heads over for his turkey dinner.

After dinner Phil is surprised when Kim gives him a thank you present… but what has she chosen for her new friend?

As the pair grow closer could their surprise friendship start to blossom?

EastEnders airs these scenes on Monday 24th, Thursday 27th and Friday 28th December on BBC One.

Do you think Phil and Kim could make a good pair? Leave us a comment on our Facebook page @EntertainmentDailyFix and let us know what you think!