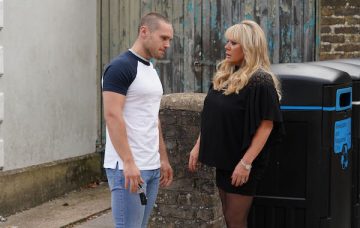 He's back in Walford and about to make a shocking discovery

It’s been quiet without him, but Phil Mitchell is set to return to Walford next week and he’s going to make a shocking discovery when he does.

While he’s been away, wife Sharon has been having a secret affair with teenager, Keanu Taylor.

The pair have gone to extreme lengths to hide their fling, but eventually called time on it when Keanu’s mum, Karen found out.

But Sharon’s been feeling the stirrings of jealousy, especially when stepdaughter Louise asks Keanu for driving lessons.

When Mrs Mitchell then spots him fixing Dennis’s bike, Shazza finds herself unable to resist her former fling any longer and invites him over for lunch.

Thinking things were definitely over, Keanu’s confused (it doesn’t take much!) but agrees to go.

Before lunch, however, Keanu gives Louise her driving lesson and Jean comments to Sharon that the pair fancy each other – leaving Mrs Mitchell furious and determined to get her stepdaughter away from her man.

As the lesson ends, Louise storms off – what’s happened between them?

Sharon doesn’t seem too bothered about Lou though and is more concerned with getting Keanu back. As she makes advances on him, he pushes her away and tells her she can’t keep playing these games with him.

Forced to admit the truth, Sharon tells him she loves him. Crikey, that escalated quickly!

They head back to her place and get down to showing each other just how in love they are in the bedroom.

Meanwhile, thinking Sharon is out, Louise and Keegan are downstairs talking about their feelings for each other.

One things soon leads to another between them and they end up kissing and taking the next step in their relationship.

With the Mitchell house a hotbed of action it’s the perfect timing for Phil to return home!

He’s back to surprise his wife and kids, but in reality they’re horrified as they’re all doing something that could land them in big trouble with the Mitchell hard man.

As Sharon and Keanu, Keegan and Louise desperately try to get dressed and cover their tracks, who will Phil catch in the act?

Phil left Walford in a hurry “on business” and fans have been convinced he’s going to bring son Ben back with him.

While it looks like he’s alone this time, will he need his family around him after finding out the truth about what’s been going on while he’s been away?

Should Sharon choose Keanu or Phil? Leave us a comment on our Facebook page @EntertainmentDailyFix and let us know what you think.

EastEnders airs Mondays and Fridays at 8pm and Tuesdays and Thursdays at 7.30pm on BBC1