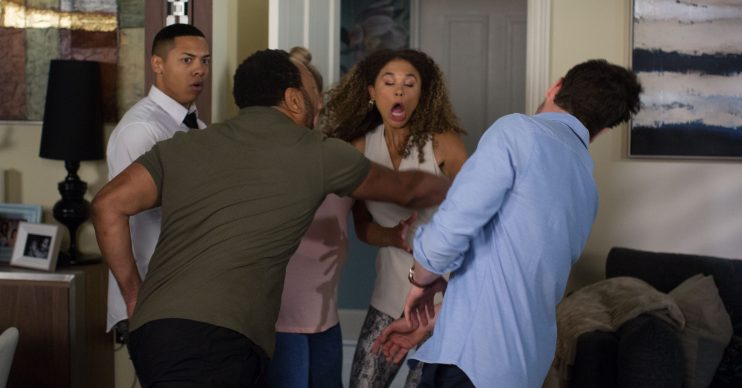 Whose side will Chantelle take?

New pictures have been released by EastEnders that show Mitch Baker and Gray Atkins going head to head.

In scenes to air on Friday July 26, Mitch lashes out at his son-in-law, but what has sparked the confrontation?

It all comes down to Mitch’s son, Keegan, who he shares with Karen Taylor.

After spending the day with Gray at his office, Keegan is inspired – but not to become a lawyer like his brother-in-law, to quit school instead.

Mitch is fuming and, seeing red, storms over to No.1 to confront Gray.

Not charmed by Gray’s nice-guy act, all hell breaks loose as Mitch goes head to head with his daughter’s husband.

The gloves are well and truly off as the two men hurl insults at each other and it quickly comes to blows, with Mitch lashing out and punching Gray.

Chantelle’s horrifed and comes to Gray’s aid, but will she be the one to really pay the price when her family have gone home?

EastEnders fans were left sickened recently after Gray punched his wife in the stomach.

The solicitor launched an evil physical attack on Chantelle after he was humiliated by being beaten in the Walford 10k by her dad Mitch.

One said: “Gray makes me sick to my stomach poor Chantelle.”

A second said: “I genuinely felt nauseous at the Chantelle and Gray storyline #EastEnders.”

Another added: “Even though I knew there was something not right in Chantelle and Gray’s relationship tonight’s episode literally made my heart drop to my stomach #EastEnders.”

The BBC soap has worked with domestic abuse charities Women’s Aid and Refuge on the hard-hitting storyline and had purposely not shown the inside of the Atkins’ house to show how even perfect couples can be different behind closed doors.

EastEnders boss Kate Oates shared in a statement: “When Chantelle and Gray arrived on the Square, they gave many of their neighbours a big dose of life-envy with their perfect relationship and no-filter-needed looks and lifestyle.

“But there is truth in the old adage that you don’t know what goes on behind closed doors; and the very first time we crossed the threshold of No 1, we saw the truth of their relationship, and the violence Gray subjects Chantelle to.”

Sandra Horley, CBE, chief executive of Refuge, praised the soap for tackling the story: “Domestic abuse is the biggest issue affecting women and children in this country today.

“It is a crime which takes the lives of two women every week in England and Wales alone, with one in four women experiencing the issue in their lifetime.

“Domestic abuse mostly happens behind closed doors – hidden, lurking in the shadows of our society.”

She added: “The more we all understand domestic abuse, be it the physical, emotional, sexual, financial control exerted by one partner over another – and are able to spot the signs – more women, like Chantelle, will be able to seek help from specialist organisations like Refuge.

“No one should live in fear of their partner. Refuge commends EastEnders for shining a light on this insidious issue.”

Teresa Parker, head of communications for Women’s Aid, added: “It is important when portraying domestic abuse on screen to make it as realistic as possible, and EastEnders have been working with us from the early stages of the storyline, through to advising on themes to the detail of the scripts.

“From the initial red flags to seeing what is going on behind closed doors, this storyline has been thoroughly researched with experts in domestic abuse.

“As well as using our knowledge of survivors’ stories to inform our feedback, we visited the show with Natalie, who is a survivor of domestic abuse who campaigns with us at Women’s Aid.

“She met with the scriptwriters and with Jessica who plays the part of Chantelle, to talk through what it is really like to experience abuse in a relationship.

“We look forward to supporting Jessica, Toby and the EastEnders team as they develop this new storyline, which will raise so much awareness of what is often a hidden issue.”

Do you think Mitch should have hit Gray? Leave us a comment on our Facebook page @EntertainmentDailyFix and let us know what you think!