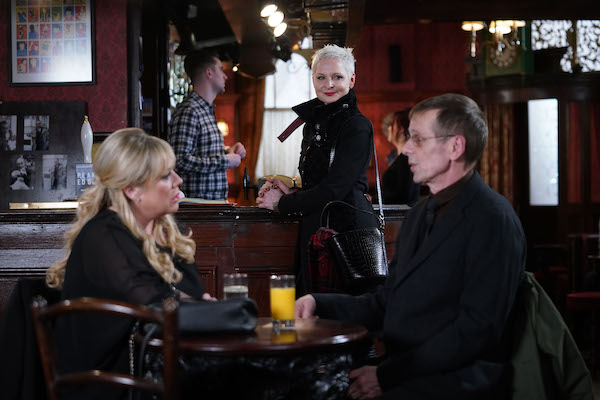 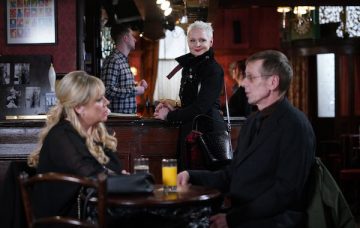 A sad day brings them back to Albert Square

EastEnders sees two familiar faces return to Walford next week, but sadly the return of Lofty Holloway and Mary ‘The Punk’ Smith isn’t a happy one.

The pair are set to make a comeback to the Square after being away for three decades for Doctor Legg’s funeral. But while the circumstances might be sad, they’re thrilled to see some old friends from years gone by.

As the day of Doctor Harold Legg’s funeral arrives, Dot finds she isn’t well enough to go along and pay her final respects after having been up all night.

Heartbroken that she isn’t fit enough to attend herself, Dot is then further upset when she sees the poor turnout for the funeral and she is left fuming at the lack of effort put in by the rest of the Square.

As well as Sonia, Rainie is one of the few who turns up to pay her final respects to the doctor… but Sonia isn’t exactly thrilled to see her and there’s clearly some tension in the air.

At the chapel it is left up to Sonia to step into her grandma’s shoes in her absence and read Doctor Legg’s eulogy.

The service goes well and the legendary physician is given the farewell that he deserves… and the celebration of his life continues at the Vic.

Back at the pub, Dot has recovered from her sleepless night well enough to make it to the wake, and she is thrilled to see so many people have gathered to wish Doctor Legg a final farewell.

But nothing can prepare her for seeing Lofty and Mary back in Walford after 30 years… talk about a blast from the past!

Sharon is also thrilled to see her old friends, especially when Mary introduces her daughter, Annie, to everyone.

As they all reminisce about Doctor Legg and what a true gentleman he was, their reunion after all this time is bitter sweet.

Out on the Square everyone gathers to pay the doctor one last fitting goodbye, a moment that will be remembered by Dot for the rest of her days.

But how is she going to cope now that she doesn’t have her closest friend with her?

This might be goodbye to Doctor Legg, but he certainly won’t be forgotten in Walford for a very long time.

Are you pleased to see Lofty and Mary back? Leave us a comment on our Facebook page @EntertainmentDailyFix and let us know what you think!