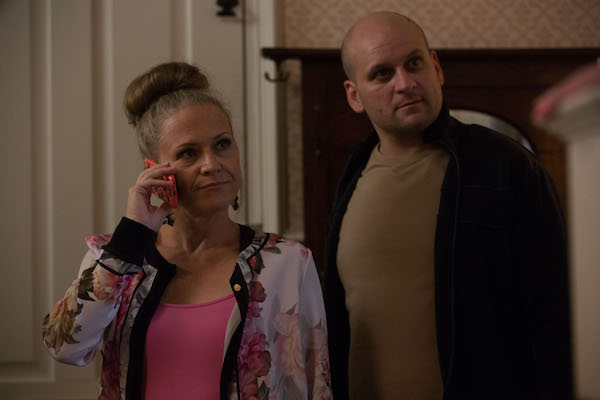 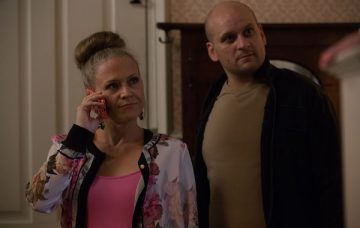 The pair are growing closer and Shirley's not happy

EastEnders Linda Carter continues to shun her family in favour of Stuart Highway and his lies next week.

But as Shirley returns to the fold, can she make her daughter-in-law see sense about where her allegiances should really lie?

Tina, Whitney and Halfway are getting nowhere as they try to pressure Linda to visit Mick in prison and at least hear what he has to say. But Linda refuses to listen and won’t take back her wedding ring.

When Stuart arrives at The Vic, Tina let’s rip, but Linda once again defends him and asks him to stay. Whitney tries to make a stand for Mick (of course she does) by getting the punters on side, but Linda stands firm.

Shirley arrives back the next day and is horrified when she finds out everything that’s gone on in her absence.

She loses it with Linda, then lashes out at Stuart when he turns up, and assures Tina they’ll do all they can to help Mick.

Shirl contacts Phil to ask him to get Ritchie back on side as Mick’s solicitor and he assures her he’ll sort it when he’s back – later in the week!

Shirley and Tina then return to the pub supposedly to collect their belongings, but in a twist, Shirl hurls Linda’s things over the bar and kicks her and Stuart out!

Unable to do anything, Linda heads off and spends the night at Stuart’s – but will anything happen between them?

The next day, Linda wants her home back and storms into The Vic with the police.

The cops tell Shirl she can’t chuck Linda out, but it’s not long before things get out of control…

With Linda seemingly falling further under Stuart’s spell, can anyone make her see exactly what he’s up to?

Fans are livid with the Carter matriach for turning her back on Mick when he needs her most, but can she really ditch her husband after all their years together? Does she really and truly believe Stuart’s lies 100 percent?

Mick’s been suffering in prison and having Linda turn her back on him has destroyed him.

Even with Shirley’s backing, can Mick find it in him to fight without the support of his L?

EastEnders airs on Mondays and Fridays at 8pm and Tuesdays and Thursdays at 7.30pm