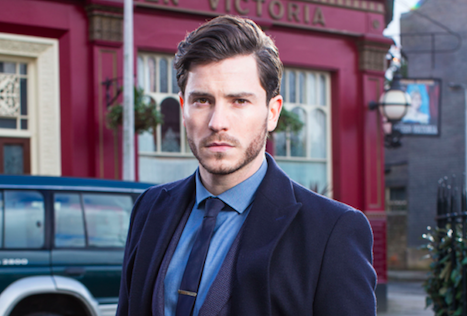 The truth is catching up with him...

The truth catches up with EastEnders‘ Gray Atkins next week when someone works out he has been abusing his wife Chantelle. But who uncovers their secret?

EastEnders fans were horrified when it was revealed that the Atkins’ marriage was a million miles from perfect.

While viewers know that pregnant Chantelle is the victim of domestic abuse at the hands of her evil husband Gray, everyone on Albert Square remains oblivious to what is going on behind closed doors.

Read more: EastEnders’ Lee Carter is returning after two years away from Walford

To their friends and family, Chantelle and Gray have got the happiest marriage and the perfect life, living in the most expensive house on the Square with their two beautiful children.

But little do they know, when Gray gets his wife alone he lashes out, leaving her battered and bruised while everyone else is oblivious.

Until now Gray’s promises to change have been nothing but empty words and, despite the fact he feels guilty after hitting his wife, it doesn’t stop him from thinking twice the next time he sees red.

But next week it seems he might be making steps to become the husband Chantelle deserves when he tells her he is going to see a therapist about his anger issues.

Chantelle is thrilled that he is finally addressing his behavioural problems and feels encouraged that he is making steps to be a better man… however that all changes when she accidentally cuts her hand and ends up in hospital.

Gray is adamant they need to take her to A&E for stitches, but what he didn’t count on is a nurse noticing Chantelle’s bruises and taking action.

But how far will the nurse go to show Chantelle that there is support available for someone in her position?

As Gray prepares for his counselling session, Chantelle is by his side offering support… but will he be able to go through with the appointment and admit what he has been doing to his wife?

And will Chantelle reach out and get the help she desperately needs? Or will she continue to suffer in silence?

Do you think Gray will go through with his counselling session? Leave us a comment on our Facebook page @EntertainmentDailyFix and let us know what you think!