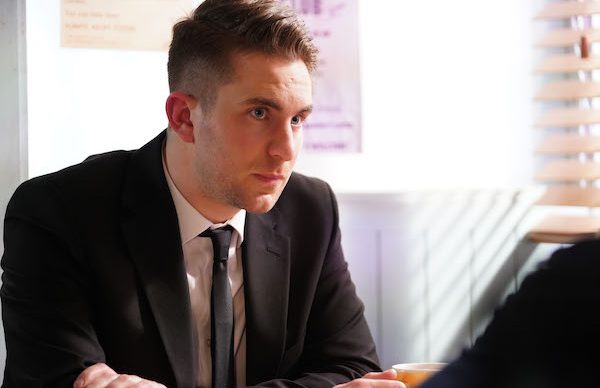 Callum Highway gets down on one knee in next week’s EastEnders, but after his recent distant behaviour, will Whitney Dean say yes?

EastEnders fans have watched Callum – better known to soap fans as Halfway – struggle recently with a secret so huge that he can’t even tell his girlfriend Whitney.

And finally, after weeks of seeing Callum hiding a secret, trying to get out of going back to the Army, and even self harming, it was revealed last week the secret that Halfway has been hiding is that he is gay.

Of all people, it was Ben Mitchell who discovered the truth as Callum confronted him about a stolen van he’d sold him… and out of anyone in Walford, Ben is the worst person to have a hold over you.

But as Callum struggles with his sexuality, it seems he is going to bury his head in the sand and try and make a life with Whitney, because next week sees him pop the question to his long-term girlfriend.

The pair have become estranged recently, with Whitney puzzled by Halfway’s secretive behaviour.

Even when the couple moved into their own flat together, the milestone moment was ruined by Callum’s coldness.

Confiding in Stacey that Callum has been distant, Whitney is clearly worried about her relationship, and her fears seem to be confirmed when she gets a text from her other half asking if they can talk.

Convinced that Callum is going to end things, Whitney is stunned when she gets home and finds him preparing to propose… will she say yes?

But even if Whitney goes agree to be the new Mrs Highway, surely Ben is a ticking time bomb just waiting to go off?

If there is anyone in the Square who is the master of manipulation, it is Phil’s son… but just how much will he use Halfway’s secret to his advantage?

How long do you think Ben will keep Halfway’s secret? Leave us a comment on our Facebook page @EntertainmentDailyFix and let us know what you think!