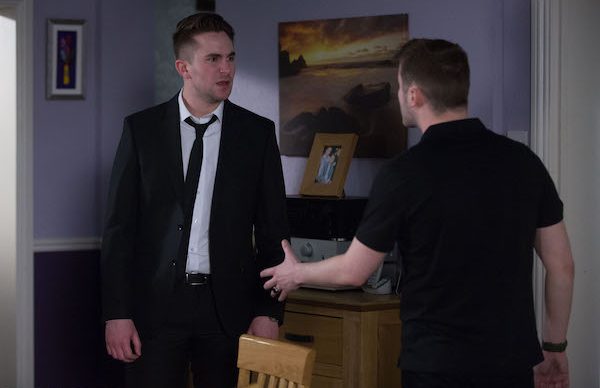 What has caused them to come to blows?

Next week’s EastEnders sees Callum Highway have a huge fight with Ben Mitchell as Ben does some digging into Halfway’s private life.

Despite getting a clean bill of health following his medical check up, meaning he is fighting fit and able to go back to his role in the Army, Callum told Whitney that he failed his medical assessment.

While it remains a mystery why he would lie about something so huge, it seems Ben might be the one to hit the nail on the head next week…

Callum’s week gets off to a positive start as he and Whitney move into their new flat above the undertakers.

Whitney is thrilled when Halfway gives her a thoughtful moving in present, and the pair seem more loved-up than ever as they celebrate having their own home at last.

But there’s clearly something bothering Halfway, and his secret is almost exposed when Tiffany helps the pair unpack and she starts messing about with his Army uniform with Whitney.

But when Callum catches them joking around, he doesn’t the funny side and his response leaves both women shocked. But why has Tiffany’s joke touched such a nerve with him?

Callum’s week continues to go downhill when he decides to buy a van from Ben.

Heading over to see Ben to sort out the sale of the van, Callum is totally thrown when Ben mentions seeing him hurting himself the previous week.

Callum doesn’t take kindly to Ben’s interference and the pair come to blows, but with Ben’s words clearly having an effect on Callum, could Ben be on to something? Is Callum struggling more than everyone realised?

Could Halfway’s secret reluctance to return to the Army have something to do with his mental health? Or is there something else entirely going on with Whitney’s other half?

What do you think Callum is hiding? Leave us a comment on our Facebook page @EntertainmentDailyFix and let us know what you think!